Kurds Protest Erdogan in Paris Over 2013 Killings of Activists 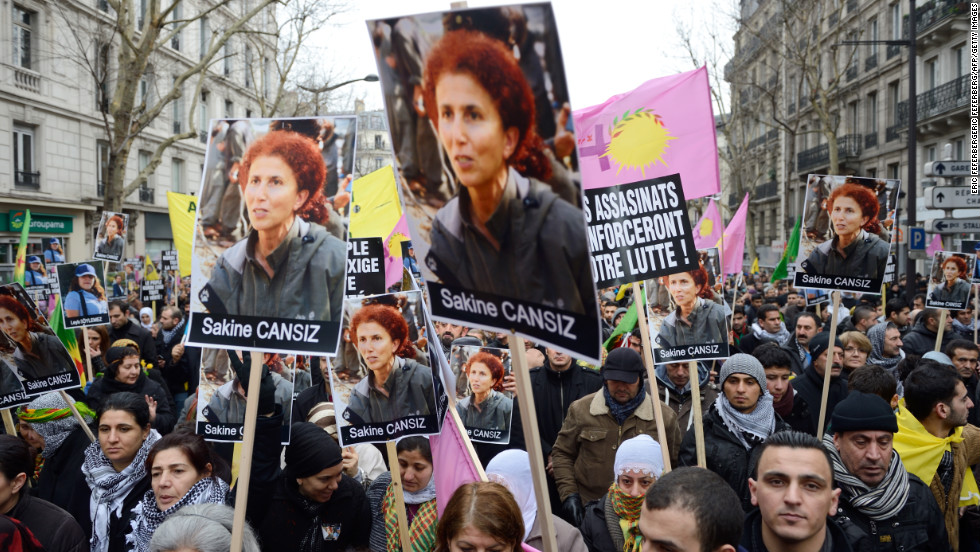 The Turkish president’s France visit touched off a mass rally by Kurds in Paris on Saturday to protest the failure of the French authorities to enlighten 2013 killings of three female Kurdish activists with links to the outlawed rebel group.

Thousands of Kurds gathered to express dismay over the legal proceedings which have so far failed to produce any conviction for the murders believed to be carried out by the Turkish intelligence.

The bodies of the three women — Sakine Cansiz, a 54-year-old founder of Turkey’s outlawed Kurdistan Workers’ Party (PKK), Fidan Dogan, 28, and 24-year-old Leyla Soylemez, were found with bullet wounds to the head and neck in central Paris in January 2013.

The Turkish national intelligence agency MIT officially denied any role in the killings, but French investigators at the time concluded Turkish spies were “implicated” in the case, according to a judicial source.

The only suspect, Turkish national Omer Guney, died in prison in late 2016 before his case came to trial.

Ali Dogan, the brother of Fidan, demonstrated with other family members and said they “no longer have hope” of justice.

“I watched on television the press conference between Erdogan and Mr. Macron yesterday. It’s sad that the president did not mention the murder of my sister… it seems that we are hiding things and France doesn’t want to divulge information to preserve its interests” with Turkey, he told AFP.

The Turkish state has fought a decades-long conflict against the PKK, which has resulted in deaths of about 40,000 people since the 1980s.

Meanwhile, the Armenian community in France also expressed anger on Saturday over Erdogan’s visit to Paris, saying it revealed him to be a “dictator.”

“Recep Tayyip Erdogan showed the French his true face, a dictator who expresses himself as if he were in his palace, in defiance of the European standards which he claims to adhere to,” said the Coordinating Council of the Armenian Organisations of France (CCAF).

At a press conference with Macron on Friday, Erdogan lashed out at a French reporter who asked him about claims that Ankara sent arms to Syria.

Erdogan told the journalist he was talking like a member of an outlawed group that he blames for last year’s failed coup in Turkey.