With his son’s photo at her hands, mother of Kemal Kurkut has never abandoned her quest seeking justice for his son’s killing by police broad daylight during Newroz celebrations in the southeastern province of Diyarbakir this March.

The police murder of Kemal Kurkut, 23, was captured live on cameras and deeply ingrained in public imagination of the region’s people as the most vivid encapsulation of injustice and cold-blood execution of an unarmed civilian in the street.

Since then, no police officer was suspended or received punishment for the action, which was reckless and unnecessary according to the independent observers.

On Thursday, the police officer who allegedly shot the young man appeared at first hearing of the trial. The mother and other members of the family were also present at the court.

To the agony of the tormented mother, the judge refused the prosecutor’s demand for the arrest of the suspect.

Before their eyes, the police officer, appearing unperturbed and unfazed, slipped away from the court, just to take on another duty.

It only aggravated the pain of the mother who was rebellious but hapless and desperate in the face of nonchalant legal authorities.

Speaking to the Turkish media, Secan Kurkut revisited the moment of the police shooting of his son. The memory is vivid and the pain still so raw, she recounted her ordeal.

“He continues his duty as if nothing happened. What kind of justice is this?” fumed the grieving mother in indignation.

The shooting of Kemal Kurkut generated fierce public debates over the encounters between people and security forces members in many parts of southeastern Turkey.

The urban centers of Sirnak and Diyarbakir provinces and many towns had become war zones where security forces and outlawed Kurdish militants engaged in street battles for two years.

Security forces also laid sieges to certain neighborhoods and strictly controlled access to and exit from the designated areas.

In March, Diyarbakir became home to Newroz celebrations. The path to the killing of Kemal Kurkut took place against such backdrop.

The police claimed that they suspected that he was a “suicide bomber” and was heading to a security checkpoint. The claim was disproved by the existence of video footage and photographs. 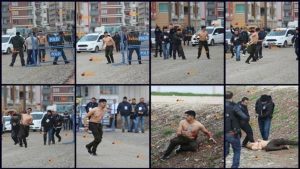 His family and lawyer strictly refuse the police account of the shooting.

Emin Aktar, the lawyer of the family, told the courtroom about how authorities broadly abuse their power with the knowledge and confidence that they could go away without punishment.

That broad leeway provided to security forces and officials, he argued at the hearing, result in reckless acts. That, according to him, what led to the killing of Mr. Kurkut.

According to the footage, police grew suspicious of the young man and after a security control at a checkpoint, he was stopped. The police told him to take his t-shirt off. He did everything he was told. After a failure in communication with police, the scared Kurkut tried to get away from the checkpoint only to be shot by police.

He walked away several steps after being shot. His face was in pain when photojournalists present there captured him right after the police shot him.

He then fell to the ground near the road, seeking help from the police. He died within minutes.

A Mother and a Beloved Son

“I raised him to the age of 23 with only a small salary. Is that easy?” the anguished mother said in remarks to Ileri Haber, a news web portal after the first hearing.

“His father died when he was five years old. They were four brothers, Kemal was the youngest, while the oldest was at the age of 17. I looked after them under hardships and great difficulties,” the mother recalled the days when she had raised her kids on her own.

Her son Kemal was studying Fine Arts at a university in Diyarbakir. 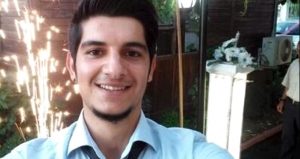 “He used to tell me: I’ll be an artist, I’ll make you live in palaces. You will forget the pain you lived through… Kemal was smart, silent. He had nothing,” she said.

The mother also fulminated against police claims about his son that they suspected to him to be a “suicide bomber.”

“There was nothing out there. If they found anything in his bag, God knew what they would have done to us,” she said in disbelief.

What infuriated her was the fact that the police officer who shot him is now freely wandering in the streets.

“He was about to go to Newroz. They should have asked that, investigated that. Why did you do this to a young man? Why? Better capture him, imprison him, even shoot him in the foot rather than straightly gunning him down,” she said, looking still shell-shocked and perplexed.