A Turkish banker has been found guilty by a U.S. jury over charges of violating U.S. sanctions against Iran in a trial that has strained relations between Turkey and its NATO ally.

The jury has found him guilty on five counts. He is not found guilty on money laundering charge.

After two weeks of recess, the jury came together on Wednesday for new deliberations. On the afternoon, the jury delivered its verdict.

The case appeared to be a diplomatically explosive. The ruling rattled the Turkish leaders who decried that the trial is a plot against Turkey.

Halkbank executive Atilla stood as the only defendant in the case after gold trader Reza Zarrab became a witness and testified against Mr. Atilla.

Mr. Atilla was arrested by Federal Bureau of Investigation (FBI) agents at John F. Kennedy International Airport in New York City earlier in 2016. To his astonishment and surprise, the banker first learned about the charges of helping the multi-billion dollar scheme to violate U.S. sanctions against Iran. He immediately denied any link to the scheme.

Before him, Turkish-Iranian businessman Zarrab was detained in Miami. But it was Mr. Atilla’s arrest and later Mr. Zarrab’s cooperation with U.S. prosecutors laid the ground for the trial which began in late November.

Defense lawyers of Hakan Atilla portrayed an honest, hardworking bureaucrat who unwittingly became a victim of an international intrigue and a larger political drama that involved bigger actors other than the banker.

Prosecutors, however, ran counter-arguments to uproot that portrayal, charging the Turkish banker with conspiring along with Mr. Zarrab to breach the U.S. sanctions. According to the prosecution, he was the architect, the technical wizard of the complex scheme to circumvent international sanctions against Iran. He helped the businessman, who had close links to then-Prime Minister Erdogan and his family,  disguise sham food trade by forgery of documents.

He was accused of using his expertise to orchestrate Mr. Zarrab’s fake food trade, to find loopholes in the sanctions. Victor Rocco, the lawyer of Mr. Atilla, attacked the credibility of the gold trader who admitted to bribing senior Turkish politicians. He also bribed federal prison guards and workers during his time in jail in Manhattan.

Zarrab, the defense lawyer said, is “a liar, a cheat, a corrupter of men … a one-man crime wave.”

But at the end, the jury found Mr. Atilla whose wife was present at the courtroom during the announcement of the verdict guilty of five charges. She burst into tears and was sad when Judge Berman delivered the jury’s decision to the reporters and audience at the courtroom.

The judge will announce the sentence against the Turkish banker on April 11.

The prosecution welcomed the ruling.

“Foreign banks and bankers have a choice: You can choose willfully to help Iran and other sanctioned nations evade U.S. law, or you can choose to be part of the international banking community transacting in U.S. dollars. But you can’t do both,” Prosecutor John Kim said in a statement. 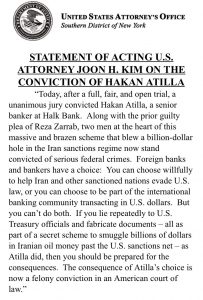