President Recep Tayyip Erdogan appointed his son-in-law Berat Albayrak as Economy Minister and the controversial military chief Hulusi Akar as Defense Minister in the new cabinet, hours after he took his oath for his second term at the office on Monday in Ankara.

The president unveiled his new cabinet after a pompous ceremony that sealed heralding a new era as the new executive presidential system has formally taken effect amid enduring controversy and debates over the emergence of a “one-man rule.”

The president elbowed aside ethical and moral reservations when he named Albayrak as Minister of Economy and Treasury. Fuat Oktay became vice president, while there was not a surprise change for Interior and Foreign Ministries.

Both Interior Minister Suleyman Soylu and Foreign Minister Mevlut Cavusoglu retained their positions while rumors over Ibrahim Kalin as Turkey’s top diplomat found to be misplaced. 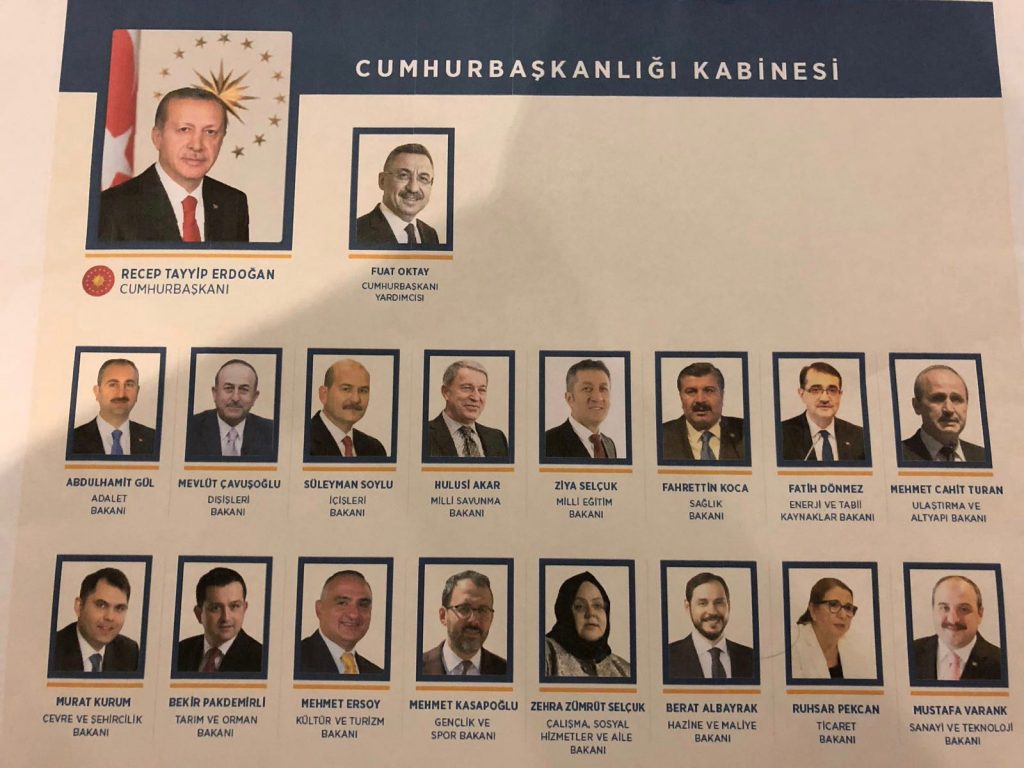 The announcement of the new cabinet sent lira plunging. Turkish lira tumbled form 4,57 to 4,69 against the U.S. dollar, while it also saw sharp decline against the euro from 5,31 to 5,50.

Erdogan, who has transformed Turkey in 15 years of rule by developing the economy and boosting its international stature, sworn in Parliament for a five-year term after his June election victory.

“I swear upon my honor before the great Turkish nation that I will work impartially to fulfill the duty I have taken on,” Erdogan said in his oath.

President Erdogan then moved to Presidential Palace for a pompous ceremony that brought together more than 20 foreign leaders.

He was greeted by Ottoman military songs as he headed to the presidential palace, which will be the placthe e of new cabinet.

Erdogan recently pledged to end the state of emergency that has been in place since the failed July 2016 coup and which has seen the biggest purge in the history of modern Turkey.

In what appeared to be the final emergency decree issued just one day before the inauguration, 18,632 public sector employees were ordered dismissed including thousands of soldiers and police officers.

Erdogan will this week immediately turn to foreign policy, visiting northern Cyprus and Azerbaijan followed by more challenging encounters at a NATO summit in Brussels where he will meet his U.S. counterpart Donald Trump and other leaders.

The new system, which dispenses with the office of prime minister, was agreed in a bitterly fought 2017 referendum narrowly won by the “Yes” camp. The issue is still polarizing in Turkey.

Its commentator Asli Aydintasbas wrote: “I don’t think it would be an exaggeration to say that we entered a ‘second republic’ era,” after the republic set up by Turkey’s secular founder Mustafa Kemal Ataturk.’

But the pro-government daily Yeni Safak wrote under the headline “historic day”: “One page is closing in Turkish history and a new page is opening.”

The president now sits at the top of a vertical power structure marked by a slimmed-down government with 16 ministries instead of 26 and multiple bodies reporting to him.

In one of the most significant changes, the E.U. affairs ministry, set up in 2011 to oversee Turkey’s faltering bid to join the bloc, is being subsumed into the foreign ministry.

Prime Minister Binali Yildirim now goes down in history as the 27th and final holder of the post in Turkey. He is expected to become speaker of the new parliament.

The transition ceremony later Monday was attended by some 10,000 guests and marked by dozens of gun salutes, has been overshadowed by a deadly train derailment in northwest Turkey on Sunday that left 24 dead.

Those attending will include Ankara’s top allies from Africa, the Middle East and the former Soviet Union but relatively few European figures.

Russian Prime Minister Dmitry Medvedev will attend, in a new sign of the warm ties between Ankara and Moscow, as will Venezuelan President Nicolas Maduro, regarded with disdain by Washington but an ally of Erdogan.

Tweeting a video apparently showing himself driving to the airport, Maduro hailed Erdogan as a “friend of Venezuela and leader of the new multi-polar world.”

Sudan’s President Omar al-Bashir is on the guest list as is Emir Sheikh Tamim bin Hamad Al-Thani of Qatar, Turkey’s closest ally in the Middle East. The only E.U. leaders are set to be Bulgarian President Rumen Radev and Hungary’s strongman Prime Minister Viktor Orban.