French magazine Le Point was targeted by supporters of President Recep Tayyip Erdogan over the magazine’s depiction of the Turkish leader as a “dictator” on its front cover.

French magazine Le Point said it had suffered harassment and intimidation by supporters of President Erdogan after it labeled him “The Dictator” on its front cover.

Police were deployed in the Pontet suburb of the southern city of Avignon over the weekend after a group of pro-Erdogan activists attempted to remove, then cover up advertisements for the magazine at newsstands. 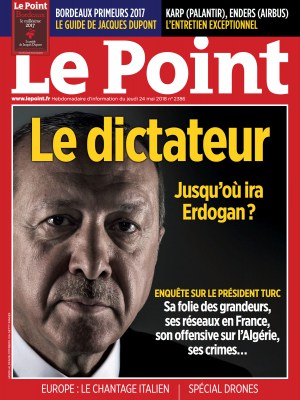 Another poster of the front cover — a portrait of Erdogan above the headline “The Dictator. How far will Erdogan go?” — was targeted at a newspaper kiosk in the town of Valence on Sunday, Le Point said.

“After a week of harassment, insults, intimidation and anti-Semitic slurs and threats towards us on social media, now has come the moment when supporters of the AKP (Erdogan’s party) are attacking symbols of freedom of expression and diversity in the press,” Le Point said on its website.

The left-leaning weekly, one of France’s most popular news magazines, published an investigation into the Turkish strongman in its latest edition which also included an editorial asking: “Is Erdogan a new Hitler?”

Erdogan and the Justice and Development Party (AKP), which he co-founded in 2001, are seeking another mandate ahead of snap parliamentary and presidential polls on June 24.

The Turkish president imposed a state of emergency following an attempted coup in July 2016 which has sparked a crackdown affecting “hundreds of thousands of people”, including killings and torture, according to the UN rights office.

The report in March this year also warned about “a continued erosion of the rule of law and deterioration of the human rights situation”, including the arrests of hundreds of journalists and opposition members.

Ankara slammed the findings as “biased” and “unacceptable.”

Christophe Deloire, the head of media freedom group Reporters without Borders, said that the incidents in France were “isolated but have a strong symbolic resonance.”

One of the leading figures in France’s ruling Republic on the Move party, Richard Ferrand, called the protests in southern France an “unacceptable breach of the freedom of expression.”

“We are not going to tolerate in France that the front cover of a magazine be somehow censored under pressure,” he told the France 3 channel on Sunday.

Many European countries are home to large Turkish-origin or migrant communities, but Germany, Austria and the Netherlands have barred Turkish politicians from electioneering in their countries.

Around three million expatriate Turks are allowed to vote in the elections next month, including 1.4 million in Germany, and they are seen as a valuable source of support by Erdogan’s party.

A year ago Germany and other European countries also banned a series of planned Turkish campaign events for a referendum that extended Erdogan’s powers.

Erdogan at the time denounced Germany’s “Nazi practices” and accused it of harboring Kurdish “terrorists” and plotters of the failed coup against him.