Though the wheel of history sometimes rolls down in reversal cycles, it is still surprising to see that the progress of the past decades in terms of media freedom has suffered remarkable setbacks on a global scale at such a pace. The whole world, including the advanced Western democracies, and most notably the U.S., stands a tough trial in the face of political winds of populism, resurgent strident nationalism and concerted efforts on both sides of the political aisle to test the most fundamental institution of social conduct: truth.

No place other than Turkey could offer a better example to encapsulate polar opposites of the two extremes played out in plain sight: the eye-catching pace of novel democratic reforms during the 2000s and disappointing setbacks of the past years in terms of almost everything; democracy, rule of law, free speech and the mechanism of truth.

Only over the past three months, Turkey saw courts handing down convictions and jail terms to scores of journalists mostly from the Zaman daily, and a dozen personnel from the Cumhuriyet newspaper. As recently as two weeks ago, 10 Turkish journalists from Zaman received 9 or 10 years of prison sentences en masse. And in June, four of former Zaman writers were handed down life sentences. Life sentences to journalists. For a number of articles, columns and tweets.

Needless to say, mass convictions were another nail in the coffin of the suffocating world of media in Turkey, a testimony to an unpleasant reality that firmly took hold in the aftermath of a coup in 2016.

And what was more jarring was the fact that some convictions came on the same day with the World Press Freedom Day, on April 24. Amnesty International decried the pernicious effects of the state of emergency on media and civil society. In a riveting report, the London-based rights group noted, emergency rule laws and measures create a “chilling climate of fear” across the society.

Mehmet Altan, Ahmet Altan, Nazli Ilicak, Hidayet Karaca, Alaeddin Kaya and two more people have been handed aggravated life sentences. For Turkey’s political authorities, journalism have become synonymous with “terrorism.” The easy deployment of the term blurs the lines of a real distinction between an act of terrorism and a journalistic work, and criticism of the authorities is measured within the realm of violent conduct.

In late April, Human Rights Watch (HRW) offered a disquieting report about the state of the press in Turkey. “The jail sentences handed down to Cumhuriyet journalists without credible evidence of wrongdoing shows how far Turkey will go to silence the media,” Hugh Williamson, Europe and Central Asia Director of HRW, said in aftermath of the court ruling against Cumhuriyet personnel.

The sense of shudder was prevalent among EU leaders and the international community.

The bad news never ceased after that. June and July saw mass convictions against workers and journalists from Feza Media Group, which owned the country’s once largest newspaper Zaman, weekly Aksiyon magazine and the Cihan news agency.

By all accounts, the state of media in Turkey is glaringly dismal. There is an implacable consensus on that.

Recently, the crushing of media in Turkey is inextricably intertwined with a democratic breakdown that was in the making over the past years. Turkey’s slow-motion drift from Western-style liberal democracy, something it has never achieved in full-fledged form, to a more autocratic model of governance has had a profound impact on freedom of media and thought.

In the late 2000s, Turkey was a promising story, a model for the rest of the Middle Eastern region, given its flourishing economy, democratic reforms at home and negotiations for membership to the EU. The Turkish model, as then was called, has initially begun to unravel since the Arab Spring, with its risks-laden foreign policy and undoing of democracy since the Gezi Protests. The rollback of democratic gains was discernibly evident on media more than anything else.

The story, however, has a prologue and a historical background goes back to the early roots of political modernity in Turkey. 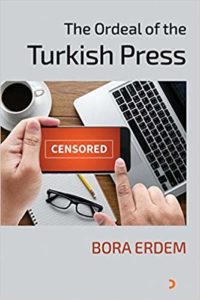 A broader historical look, as attempted by Bora Erdem in his recent book, offers a detailed account of a troubled relationship between policymakers and the press from the late Ottoman Empire to the Republican era. The political modernization from the late Ottoman times to today, in a sense, is also the story of the history of relations between media and the government. Simply put, the relationship was mostly defined in an antagonistic fashion, with authorities loathing to see intellectuals’ penchant to use the press as a medium and agent for social change and political reform. In the absence of an indigenous bourgeois class, intellectuals and reformers saw state apparatus as the prime source of power and the ablest agent to bring about fundamental change to pull back an empire from falling apart.

Consequently, the press became the public venue for political wars. It is no different today. Whereas Erdem’s study offers a valuable sketch from a broader historical perspective into how things went wrong for Turkey’s media freedom according to EU standards, a number of other works on media try to untangle the link between authoritarian drift and the deteriorating status of free thought and speech from a global perspective.

Liberties and media freedom suffer setbacks on global scale amid the rise of impulsive and autocratic leaders such as Viktor Orban, Vladimir Putin, Abdelfettah Sisi, Duterte, Recep Tayyip Erdogan and Donald J. Trump. The coming of, in the words of The Economist, the age of post-truth politics is singled out as the most definitive indication of this new era. The retreat and depreciation of truth’s place in today’s political dialogue in public and civic space signify the corrosion of the most basic element of social conduct.

The leaders mentioned above are not fond of criticism, free and independent media. They neither have any scruples over attacks against media members. Trump’s relentless attacks media as “fake news” not only undermines the U.S. role in becoming a leading actor to steer human rights and media freedom agenda across the world, at least in discursive level, but also encourages authoritarian-minded leaders to crack down on press without fear of international backlash.

Turkey, in this story, has a unique place. According to the Istanbul-based P24 Platform for Independent Journalism, more than 150 journalists are currently in jail. This number, according to the annual report of the New York-based Committee to Protect Journalists (CPJ), makes Turkey an open prison, a country that jails journalists more than any other country in the world.

A Political History of Turkey’s Press

In the long 19th century, the Ottoman intelligentsia saw the press as an indispensable medium to defend the idea of political reform to keep a fracturing empire intact. The empire faced a number of challenges internally and externally.

The geopolitical rivalry and challenge from the Austrian Habsburgs and the Czar’s Russia were threatening the territorial integrity of the empire, which also had to deal with imperialist interests in its far-flung territories in North Africa. Internally, the emergence of nationalism among Christian minorities and their push for secession in the Balkans posed grave threats for the Sublime Porte. To ward off separatist nationalist waves, Ottoman intellectuals came up with a number of ideologies. Ottomanism, constitutionalism, sharing the decision-making power with Christian minorities at a constitutional assembly alongside with the Sultan’s office, removal of the Millet system to establish equal citizenship based on secular Ottoman identity were among the driving intellectual currents of the day.

Erdem successfully injects a new life into the role played by media in the transformation of the Ottoman body politic from within and without. The Young Ottomans’ reliance on the press caused alarm in Sultan’s palace. And the political authorities tried to stifle critical voices in the media by either forcing leading intellectuals into exile or shutting down their media outlets.

The practice was no unfamiliar to today’s world. The shutdown of critical and independent media institutions has indeed been a long tradition in the Ottoman-Turkish political landscape. Erdem, an academic by training and media manager by experience, only briefly dwells upon the Ottoman era while zooms in his focus on the problematic relations between the power holders and media members throughout the 2000s.

The book examines the notion of freedom of expression and press freedom through the prism of the European Union. While doing so, it specifically deals with a number of cases that ended up at the European Court of Human Rights (ECtHR).

Turkey’s poor record of tolerance and the constant crackdown on writers and journalists frequently brought the country into a legal confrontation with the Strasbourg-based court. The notorious anti-terror law of the country, Article 301 of the Turkish Penal Code, became the chief legal reference point for a number of prosecutors who ruthlessly prosecuted and investigated a number of famous writers and journalists for their questioning of the official narrative in some historically sensitive issues such as the Armenian Genocide.

Orhan Pamuk, Elif Safak, Ahmet Altan, Hrant Dink and a number of other intellectuals often found themselves as subjects of legal prosecution for their alternative thinking regarding critical historical and political matters. Questioning the official policy of displacement of the Kurdish population in southeastern Turkey during the 1990s, or proposing an alternative line of thinking about the Armenian Genocide were regarded as criminal acts rather than exercising one’s right to free expression.

In Turkey, the national security issues are broadly defined and independent-minded thinkers are frequently warned not to cross boundaries in their journalistic work to avoid incurring the wrath of the authorities.

In Erdem’s book, there are examples of both progress and setbacks. After facing criticism at the domestic and international level, the Turkish government finally removed Article 301 and hence expanded the scope of the freedom of expression for journalists without fear of legal backlash.

But that moment of progress soon proved to be short-lived. From Gezi Parks onwards, the inexorable tide of authoritarianism and populism has taken the country into its grip. From 2015 to today, the government began to excel in takeovers of the media outlets. With the 2016 coup, President Erdogan’s government unleashed a massive crackdown and repression unseen in republican history. More than 160 media outlets have been closed down.

Numbers speak for themselves. The content of Erdem’s book ends in 2015. His cover, already rich in detail, highlights the challenges Turkish journalists faced during the 2000s. After exhaustion of domestic legal channels, they brought their cases to ECtHR in a bid to seek justice in that period.

In the aftermath of the 2016 coup, the European court, overwhelmed with the number of cases, more than 70,000, simply deferred them to Turkey’s newly established emergency commission to review people’s complaints.

Except taking the cases of a few journalists, Altans, the ECtHR avoids being drowned in ten of thousands of applications from Turkey. The policy has simply left Turkey’s purge victims disappointed.

The major contention of Erdem’s book is that media freedom has never materialized in a full-fledged form in Turkey’s political culture. It has never consolidated in a fashion that shields journalists from political pressure and interference in Turkey’s social domain.

But, having seen the end of the film beyond the book’s timeframe, it has never been this bad. The situation got totally out of hand, things veered off the track; not just for journalists, but for everybody, for everything in and about this country.