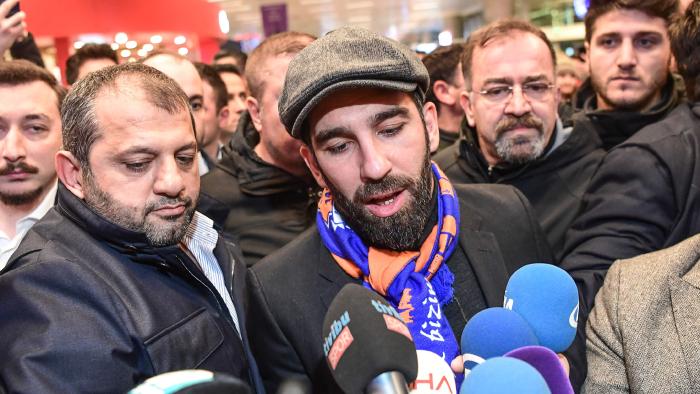 “Arda Turan is returning to his country wearing the orange kit (of Basaksehir). This is not just a transfer for Basaksehir, but a transfer for all of Turkey,” club president Goksel Gumusdag said in a statement.

However, a brawl erupted at one point between fans and the police as Turan arrived while one fan fainted.

The crowd shouted angry slogans at the police: “We are not terrorists but supporters!”

Turan was in high spirits, smiling and waving at the crowd, telling reporters he was “very happy” with the move.

“I’m here not just for short-term goals, but for long-term success,” he was quoted as saying by Hurriyet daily.

Basaksehir has risen rapidly over the last two seasons to rival the established Istanbul triumvirate of Besiktas, Fenerbahce and Galatasaray.

Turan issued a heartfelt farewell message on Twitter, explaining that playing for Barcelona was a “wildest dream” and he was “proud” to make it happen.

The 30-year-old joined Barcelona in 2015 after four successful seasons with Atletico Madrid but has been unable to hold down a first-team place.

Turan receives an annual salary of around eight million euros at the Catalan club, according to Spanish media.

He quit international football last June after former coach Fatih Terim threw him out of a training camp following a fracas with a reporter on a plane.

Turan then declared two months later he was ready for a recall. Turan has also expressed open support for President Recep Tayyip Erdogan, attending rallies to back “my commander-in-chief” following the July 2016 attempted coup.