The city council of Turkey’s Ankara earlier this week renamed the street outside the U.S. Embassy in somewhat trolling reference to the Turkish military’s ongoing operation in Syria’s Afrin.

Aluminum plates directing passersby to the alley where the embassy is located, now read Zeytin Dali [Olive Branch] Street instead of the name of the former Ankara mayor, Nevzat Tandogan. The move was not a gesture by Ankara to U.S. officials in the capital; it was rather a sign of the ever-growing nationalist euphoria driven by Turkey’s recent offensive against the U.S.-backed Kurdish militia in the northwestern Syrian enclave of Afrin.

Turkey markets the military endeavor to the outside world as an “Olive Branch,” operation.

The revision of street names as part of diplomatic retaliation is nothing new in Turkey or elsewhere in the world. Just last month, Ankara renamed a street as well as a road near the United Arab Emirates (UAE) embassy. This was a repercussion of a diplomatic feud between the Turkish president and the UAE’s foreign minister played out in social media. UAE Foreign Minister Sheikh Abdullah bin Zayed Al Nahayan accused Ottoman Governor of Medina of stealing money and property during the World War One. In March 2017, a Gaziantep street, named after the Dutch city of Nijmegen, was renamed to Ozgurluk [Freedom] street after Turkey and the Netherlands were caught up in a snowballing diplomatic row.

Russia and the U.S. reciprocally changed the names of several streets in a series of tit-for-tat during the Cold War amid a worldwide ideological tussle between the capitalist Western world and Soviet-led Communism. Such reprisals between the two have resurfaced last month when Washington D.C.’s city council decided to honor a slain critic of Vladimir Putin by giving his name to the street in front of the Russian embassy.

The urban landscape is used as a tool of diplomatic jab by many other countries including Iran, Chad and Jordan. Most recently, Egypt is reported to have been mulling a revision in the street names inherited from the Ottoman era.

While the course of international relations leaves its mark in the political moves for street renamings, domestic politics, too, play a role on the controversial matter in Turkey. The story of political modernity and republican experience is a case in point as villages, bridges, schools, boulevards and even mosques were renamed in a zealous quest to rebuild the country in the image and fashion of the republican founding fathers.

Even though rural topography in Turkey has existing names from the Ottoman era, urban areas were named for the first time in 1927, nearly four years after the republic was declared, according to studies.

When the nascent, young republic embarked on a sweeping and all-embracing project of state and nation building, reforms in language, culture, dress code, religious practices, all facets of the political life reshaped the entire nation.

Statistics produced by Turkey’s General Directorate of Civil Registration and Nationality in 2013 indicated that urban topography was frequently named after Turkey’s founding fathers –Ataturk and his successor Inonu– and the concepts related to the country’s post-war collective memory. In 2013, Ataturk was the most commonly-used reference with 3,618 streets, roads, boulevards and squares named after him. While Cumhuriyet [Republic] ranked the second place with 3,008 mentions, Inonu came 9th with 1,089 places and Istiklal [Independence] was the 10th with 1,075 places. In between were the names such as Gul [Rose], Karanfil [Carnation], Lale [tulip] and Menekse [Violet].

Renaming, a frequent practice in Turkey

From Ottomans to modern Turkey, both urban and rural landscape had their names changed with varying levels in different periods.

The most prominent figure to spearhead name changes was the late Ottoman leader Enver Pasha who ordered that “all names of provinces, regions, villages, mountains and rivers belonging to Armenian, Greek, Bulgarian and other non-Muslim peoples,” to be changed into Turkish. The Turkification that dominated all spheres of the public life continued under the first years of the republic as well.

Many residential areas were renamed in between 1922 and 1927, according to Turkish historian Ayse Hur who also said 834 villages across Turkey were given Turkish names between 1934 to 1936.

According to Turkish-Armenian linguist Sevan Nisanyan, Ataturk and Ismet Inonu showed little interest in renaming rural topography. “The radical transformation started in the second half of 1950s,” Nisanyan wrote in a 2015 report. The year 1950 also marked the end of the last government formed by Ataturk’s Republican Peoples Party (CHP). The Special Commission for Name Change, established by the Interior Ministry in 1957, was reportedly responsible for changing the names of 28,000 topographic areas including some 12,000 villages and towns, and 4,000 mountains and rivers until 1980.

Whenever names in the urban and rural landscape were simply considered “divisive, inappropriate or alien” they have been continuously going through a transformation and change under different governments since then.

Public and political opposition to ethnically-adjusted topographic names have grown louder in the years leading to the 2000s. Mr. Nisanyan says the “official policy” on name change showed first signs of revision in 2009 when then-President Abdullah Gul and then-PM Recep Tayyip Erdogan started to use Kurdish-origin names of some eastern towns.

A one-third of Turkish villages have been given back their Kurdish names under the Erdogan government, according to Mr. Erdogan’s Kurdish-origin minister Mehmet Simsek.

Several streets, roads and public buildings named after the leaders of the previous military coups including Cemal Gursel and Kenan Evren have been renamed under Mr. Erdogan’s rule.

According to a Interior Ministry, 44 streets, squares and boulevards, and 17 primary schools had been named after Evren who led a military junta that orchestrated the 1980 military coup.

In 2014, an Istanbul municipality removed Inonu from an alley’s name while Erdogan critics took out pro-Erdogan folk singer Yavuz Bingol’s name from a wider street in Inonu’s hometown of Izmir the same year.

Erdogan’s opponents also campaigned to have Sezen Aksu’s name taken out from a street over the legendary pop singer’s support for the government reforms in 2010.

In the meantime, the central Anatolian province of Yozgat turned part of an Ataturk Boulevard into Bekir Bozdag Boulevard, in reference to a cabinet minister in Erdogan’s government, in 2013.

Another coup, another wave of transformation

The battle for naming has taken a new turn since the botched coup in 2016. Reflecting the government’s self-righteousness and self-regard, the government and city councils proffered to honor the victims of July 15 coup, ‘the heroes of people’s revolution.’

The massive, across-the-board renaming campaign revived only after another military coup; a failed one this time around.

Many streets in Istanbul and Ankara were renamed after the “winners” of the July 15, 2016 putsch attempt. 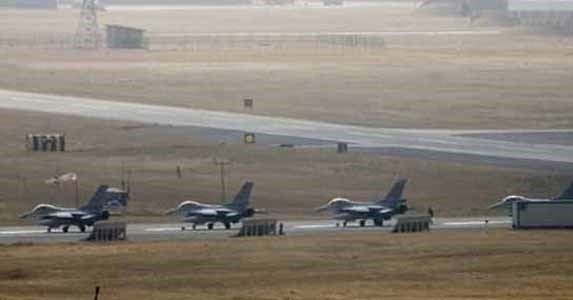 The Akinci Air Base in Ankara, the place which served as the headquarters of coup plotters, was renamed as Murted (Apostate) Base, which lost its airbase status.

Istanbul’s Bosporus bridge was renamed as “July 15 Martyrs’ Bridge” and names of the fallen military officers were given to streets, parks, villages, squares, bus stations, schools, hospitals, universities, and many other public buildings.

On the other hand, any reference or association to the parties considered divisive in the post-coup Turkey has been erased over time. 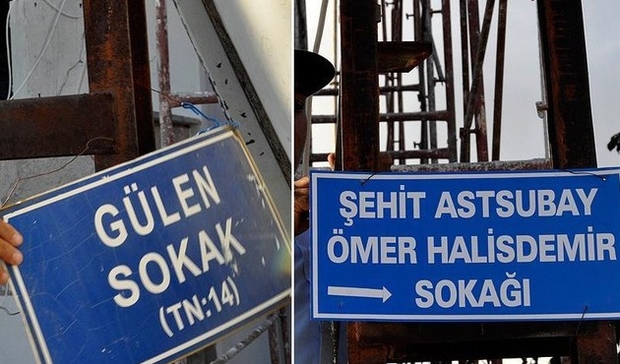 In December 2017, Istanbul’s city council changed the names of 192 streets in a renaming campaign largely aimed at removing any connection with Fethullah Gulen and his movement. Two streets in Istanbul’s historic Eyup quarter, both called Gulen [translates into smiling in Turkish] streets, were named after Omer Halisdemir, a soldier killed during the 2016 coup. The municipality also removed the names that resemble the names of media companies shuttered over Gulen ties such as Zaman [Time], Samanyolu [Milkway], Sızıntı, [Leakage], Aksiyon [Action] and Cihan [World].

The government has fallen out with Gulen in recent years and blames the failed coup on him while the latter denies involvement.

The name of another street, originally named after former footballer Hakan Sukur, was also changed as the former scorer is now a government target for his support to the Gulen’s movement.

The village where Gulen was born has also been renamed after a soldier died in Turkey’s recent military incursion in Syria’s Jarabulus.