As Turkish troops have engaged in a heavy fight with Kurdish militia in northern Syria during an offensive, pushing toward the Kurdish enclave of Afrin, a senior politician said the operation is open-ended and will continue as long as the objective of eliminating terrorist elements remains in place.

On Tuesday, direct clashes between two sides broke out while the United States voiced alarm Ankara’s operation could endanger attempts to bring peace to the conflict-torn country.

Presidential Spokesman Ibrahim Kalin told media that the Turkish troops and Syrian rebels are advancing toward Afrin. He also ruled out to give a timeline for how long the Turkish forces would stay in Afrin once it is taken over from the Kurdish militants.

President Recep Tayyip Erdogan said there would no stepping back, vowing at the funeral of the first Turkish soldier to be killed in the cross-border campaign that Ankara would emerge victorious from the campaign. 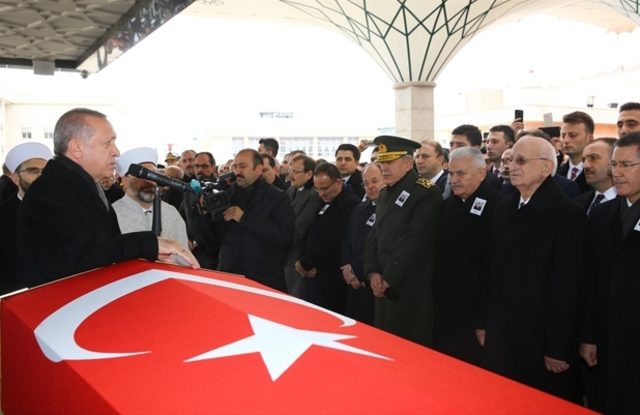 Turkey on Saturday launched operation “Olive Branch” aimed at rooting out the Kurdish People’s Protection Units (YPG) militia, which Ankara sees as a terror group, from its Afrin enclave in northern Syria.

The campaign has caused ripples of concern among Turkey’s NATO allies, especially the United States which is still working closely with the YPG to defeat Islamic State (ISIS) jihadists in Syria and fears the offensive will be a distraction.

In his strongest comments yet on the offensive, U.S. Defense Secretary Jim Mattis called for Turkey to show “restraint.”

He warned the offensive “disrupts what was a relatively stable area in Syria and distracts from the international effort to defeat” IS, on a visit to Indonesia.

As well as the artillery and air strikes, Turkish ground troops and Ankara-backed Syrian rebels have punched over the border several kilometers (miles) into Syrian territory, taking several villages, according to state media.

After intense exchanges, Turkey’s forces took control of the hill of Barsaya, a key strategic point in the Afrin region.

The Observatory said 25 Ankara-backed rebels and 26 Kurdish fighters had been killed in the fighting so far. It has also said 24 civilians have been killed on the Syrian side but this is vehemently rejected by Turkey which says it is only targeting militants.

A Turkish soldier was killed Monday on the third day of the offensive, the first Turkish military fatality of the operation. Two more were killed on Tuesday.

Sergeant Musa Ozalkan, 30, was laid to rest Tuesday with full honors in a ceremony attended by the Turkish leadership including President Erdogan.

“We will win and reach victory in this operation together with our people, together with Free Syrian Army,” Mr. Erdogan assured mourners, referring to the Ankara-backed rebels.

“We have full confidence,” he added.

The campaign — which the president has made clear has no fixed timetable — is fraught with risks for Turkey.

Two civilians have been killed inside Turkey in border towns in the last two days by rocket fire from Syria blamed on the YPG.

In Afrin, residents queued at bakeries and cars were on the streets as residents braced themselves for any violence, an AFP correspondent said.

The offensive against the YPG is also fraught with diplomatic sensitivities with Western capitals particularly concerned that it will take the focus away from eliminating ISISI.

France and the European Union have made similar comments to those made by Mr. Mattis.

But Ankara has expressed impatience with such sentiments, arguing that the YPG is the Syrian offshoot of the Kurdistan Workers’ Party (PKK) which has waged a bloody three-decade insurgency against the Turkish state.

The foreign ministry of Qatar — Turkey’s closest Gulf ally — gave its unequivocal backing to the operation.

In referring to Turkey’s invocation of 51st UN Charter for self-defense, the minister said there were clear attacks against Turkey. “YPG is not innocent. The Dutch government has never supported YPG.”

He also said there are strong bonds between PKK and YPG, reminding that PKK is listed as a terrorist organization both in the Netherlands and Europe.

Turkey also launched air strikes in northern Iraq on Kurdish militants planning an attack, the army said on Tuesday. Such raids have been frequent since a ceasefire with the PKK collapsed in 2015.

The U.N. Security Council discussed Turkey’s intensifying offensive and the worsening humanitarian crisis in Syria on Monday but did not condemn or demand an end to the Turkish operation.

Critical is the opinion of Russia, which has a military presence in the area and a cordial relationship with the YPG but is also working with Turkey to bring an end to the seven-year Syrian civil war.

Erdogan said Monday that the offensive had been agreed with Russia, but this has not been confirmed by Moscow.

However many analysts argue that Turkey would never have gone ahead with the offensive without the Kremlin’s blessing.

Turkey’s previous incursion into Syria was the Euphrates Shield campaign in August 2016-March 2017, targeting both the YPG and IS in an area east of Afrin.

The Turkish authorities have meanwhile imposed a clampdown against anyone suspected of disseminating “terror propaganda” against the operation on social media. Forty-two people were detained Tuesday, adding to 25 already taken on Monday.