U.S. President Donald J. Trump urged Turkey to avoid risky actions that could lead to accidental clashes between the Turkish troops and the U.S. forces in northern Syria as the Turkish military units and its rebel allies press forward with an offensive against Kurdish enclave of Afrin.

Mr. Trump called on “Turkey to exercise caution and to avoid any actions that might risk conflict between Turkish and American forces,” a White House statement said after the U.S. president talked to his Turkish counterpart Recep Tayyip Erdogan on phone to relay his concerns over an ongoing Turkish offensive in northern Syria.

“He urged Turkey to deescalate, limit its military actions, and avoid civilian casualties and increases to displaced persons and refugees,” the White House statement added.

But soon later, the Turkish side disputed the White House account of the call, which came amid weeks of deepening rift and eroding mutual trust between two allies. The latest bout of lingering discord broke out after Turkey’s persistent push to crush U.S.-allied Kurdish militia in northern Syria despite palpable U.S. displeasure.

On Saturday, the Turkish forces have launched an offensive to crush People’s Protection Units (YPG) in Kurdish enclave of Afrin in a bid to cease the territorial holdings of the group alongside Turkey’s border.

According to the White House statement, President Trump also expressed concern about destructive and false rhetoric from Turkey, and about United States citizens and local employees detained under the prolonged state of emergency in Turkey.

Sources close to Turkish Presidency told CNN Turk that “does not reflect the precise content of the conversation.”

#BREAKING Sources say White House readout on phone call between Erdoğan and Trump does not reflect the precise content of the conversation. U.S President Trump did not mention “concern on escalating violence” regarding the op in Afrin pic.twitter.com/SsiOEQW0xJ

President Trump also expressed concern about destructive and false rhetoric coming from Turkey, and about United States citizens and local employees detained under the prolonged State of Emergency in Turkey.

Mr. Erdogan earlier vowed that Turkey would extend its current military offensive from Afrin to Manbij to deal with the “threat of terrorism,” in an open disregard of warnings from allies who urged Turkey to keep scope and mission of its military endeavor limited.

During the call, the same theme was raised again by the U.S. president. Mr. Trump, the White House statement said, “reiterated that both nations must focus all parties on the shared goal of achieving the lasting defeat of ISIS,” referring to Islamic State.

Both presidents welcomed the return of more than 100,000 Syrian refugees back to their country in the wake of the ongoing defeat of ISIS and pledged to continue to cooperate to help people return home, the statement added.

A separate statement by the Turkish presidency underlined that Mr. Erdogan called on Mr. Trump to halt for U.S. arming of Syrian Kurdish militia.

Earlier in the day, the president spoke about the next phase of the operation after Afrin. 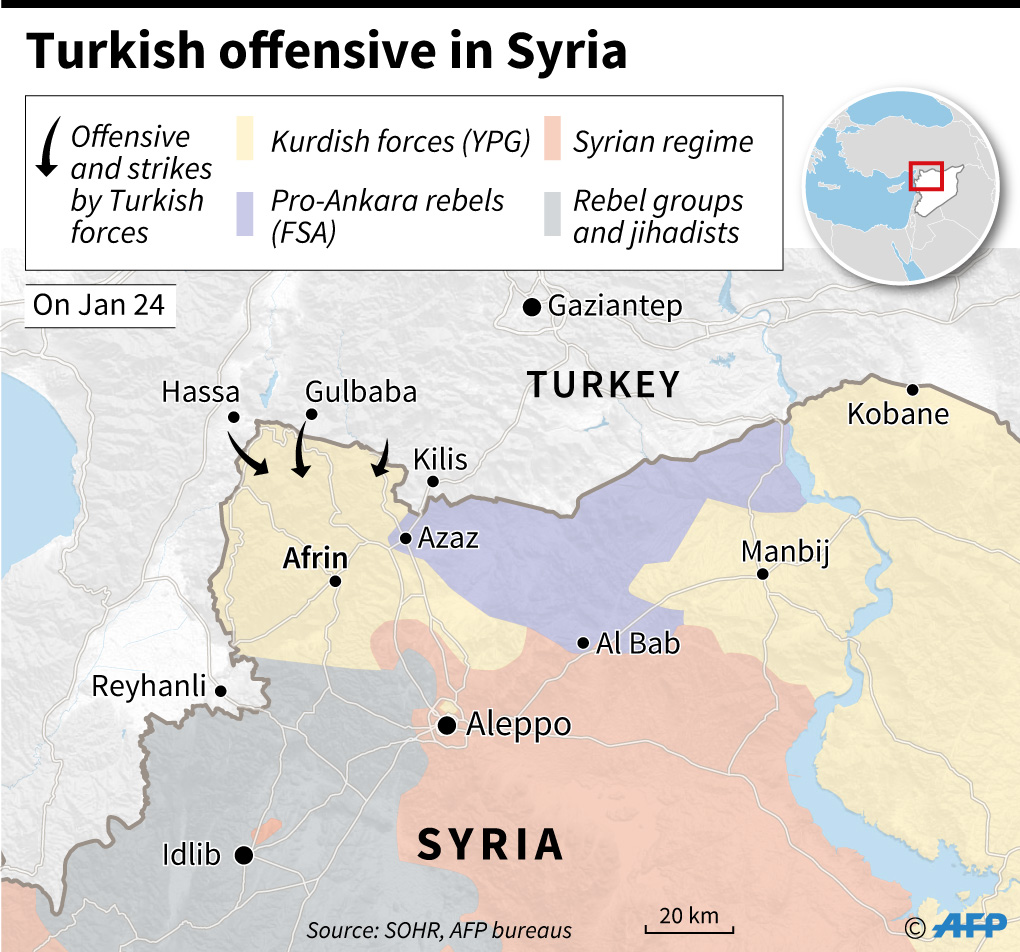 The president said he plans to “foil games along our borders starting from Manbij,” according to Al Jazeera.

“Starting with Manbij, we will continue to thwart these plans along with our border and completely clear our region of this calamity,” the president vowed.

The president lashed out at former U.S. President Barack Obama and said he deceived Turkey about safe zone plans in northern Syria.

He said last year the Obama administration betrayed Turkey over its plan to take Manbij. According to the Turkish leader, 95 percent of Manbij comprised of Arabs. Despite this fact, he lamented, the U.S. administration left the city to Kurdish control after its capture from ISISe elements.

The Turkish leader explained the central objective of the campaign as creating a safe zone to bring Syrian refugees living in Turkey back to their homes in northern Syria.

“Tillerson stressed that the security zone on the border with Syria may reach 30 kilometers,” Mr. Cavusoglu said on Wednesday.

Turkey’s relations with the U.S. devolved into a new state of crisis after the Turkish forces attacked U.S.-allied Kurdish militia in northern Syria.

On Monday, Mr. Tillerson expressed his displeasure with the nature of the Turkish military presence in Syria. “We are concerned about the Turkish incident in northern Syria,” the secretary of state told media members during a trip to London.

“We recognize and fully appreciate Turkey’s legitimate right to protect its own citizens from terrorist elements,” he said, according to Reuters.

The Turkish leader sharpened the tone of his criticism towards the U.S. for arming of Syrian Kurdish forces. He snapped at delivery of what he said sophisticated weaponry.

“They refused to give arms to us with money but they are giving weapons to the terrorist organization free of charge.”

“Why are we strategic allies?” the Turkish president fumed in indignation during an address to his supporters on Tuesday.

At least two locals were killed and 13 people have been wounded when a rocket hit a mosque in the border town of Kilis, the governor said.

The rocket landed in a historic mosque during prayer times, Governor Mehmet Tekinaslan told state-run Anadolu news agency. Two of the wounded are in critical conditions, the governor added.

So far now thee Turkish soldiers have been killed during the offensive against Afrin.

In a previous attack in the southern border town of Reyhanli, one citizen was killed and 47 wounded when a rocket hit a street.

The Kurdish militants have launched several rocket attacks against border towns in retaliation for the Turkish military operation.