“The right of a lawmaker to defend himself begins in Parliament, not in a courtroom,” said the jailed co-chair of the pro-Kurdish opposition party, appearing first time at a court hearing since his imprisonment in late 2016.

Loyal supporters gave a hero’s welcome to Selahattin Demirtas as he arrived in Istanbul courthouse on Friday, walking through tight-security measures by the gendarmerie. 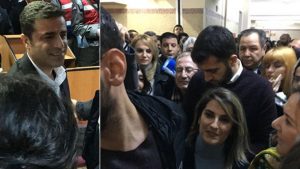 Prosecutors seek 142 years in prison for the charismatic leader for 96 separate legal cases.

He appeared defiant at the court hearing and questioned the political motivations behind the case in which he faces charges of insulting President Recep Tayyip Erdogan.

The charismatic outgoing co-chairman is the best-known face of the Peoples’ Democratic Party (HDP), which he led to great success in June 2015 polls when it entered parliament for the first time.

A smiling Demirtas, 44, wearing a black suit and white shirt saluted those chanting “chief” as he was surrounded by members of the gendarmerie.

Over 1,000 people gathered outside the court in the district of Bakirkoy, an AFP photographer said, as they chanted “Demirtas is our honor” and “shoulder to shoulder against fascism!”

In his testimony, Demirtas hit out at the trials taking place against him in which he has been unable to defend himself and insisted his immunity from prosecution as an MP was still valid.

In May 2016, a law was passed lifting 138 MPs immunity from prosecution. The HDP has previously said the measure is aimed at expelling its MPs from parliament.

Demirtas called for his conditional release but the judge said the request had to be presented in writing for “detailed examination”, before postponing the trial to May 17.

In the most serious case against Demirtas, which is being heard in Ankara, the former human rights lawyer is accused of links to the outlawed Kurdistan Workers’ Party (PKK) who have waged an insurgency against Turkey since 1984.

The PKK is blacklisted as a terror group by Ankara and its Western allies. If convicted, he faces up to 142 years in that case.

Demirtas was among 12 HDP MPs taken into custody in November 2016 under the state of emergency imposed following the failed overthrow of Erdogan in July of that year.

Now, nine MPs including Demirtas remain in jail including the party’s former co-leader Figen Yuksekdag who was stripped of her MP status in February 2016.

She resigned in May last year as co-leader and Demirtas last week said he would also step down as co-chairman of the party at a congress next month, fearing that he would likely remain imprisoned.

In Retaliation, Turkey Issues Travel Warning for Citizens Heading to US