The same day, President Recep Tayyip Erdogan came up with an upbeat assessment of the ongoing military offensive against Kurdish militia in northern Syria. But his unbound optimism runs counter to the sharp realities on the battleground, with seven soldiers being killed in one single day, and modest territorial gains defy his claim of an approaching victory — the takeover of Afrin soon.

Speaking on Saturday, the Turkish president said the Afrin operation is near complete as the Turkish forces are closing in on the town.

“The Turkish military has started to take control of the mountains and it is advancing on Afrin. There is not much to go,” he said.

“We are advancing into Afrin city center. We are close.”

But a map featuring the territorial gains of the Turkish troops and allied rebels offers a totally different story. After 15 days of fighting, the Turkish military was able to capture only 3.5 percent of Afrin area, a figure that suggests that NATO’s second-largest army and its proxies might have bogged down in a bloody counterinsurgency warfare against a resilient militia force. 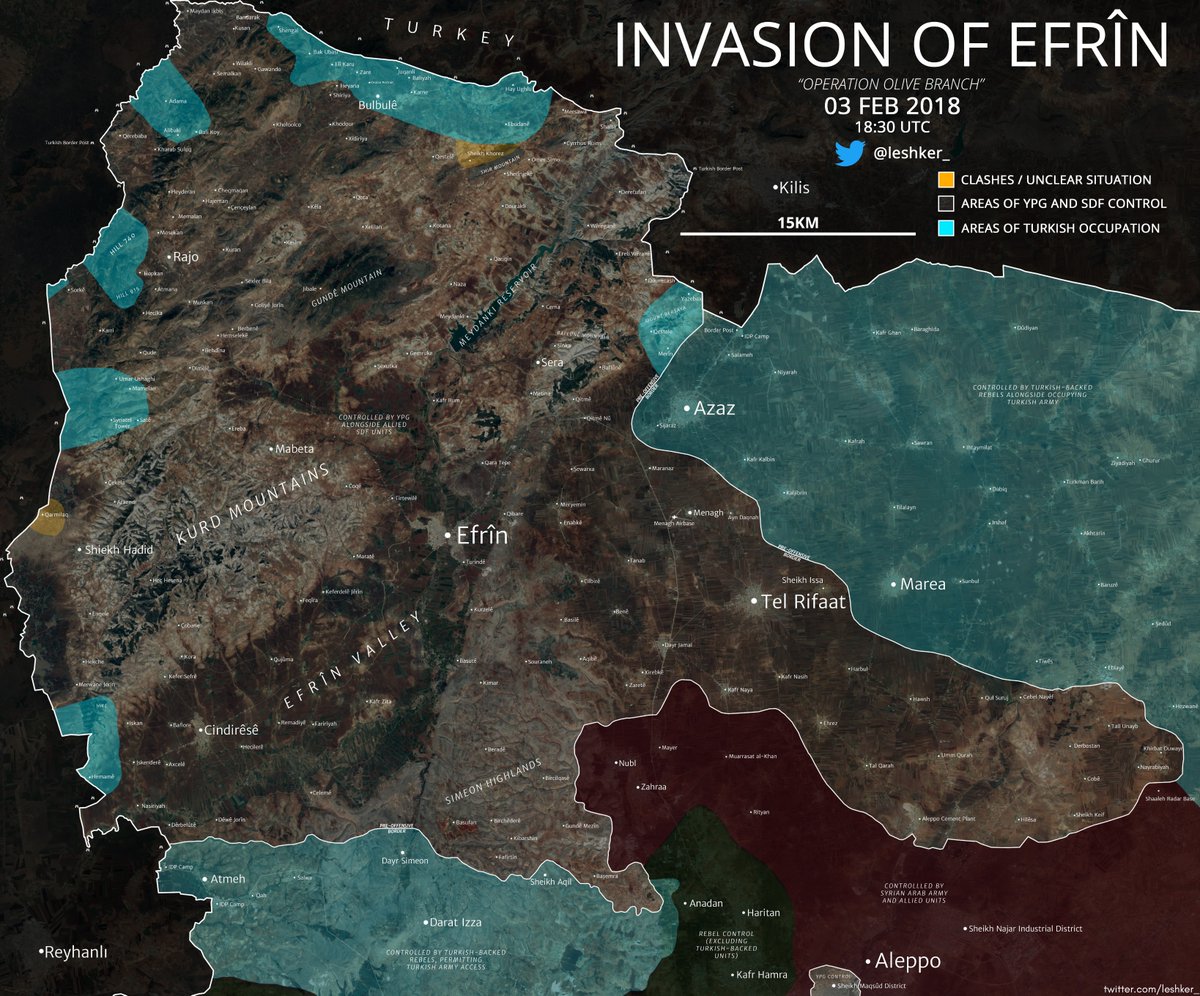 Five soldiers were killed in one single attack by People’s Protection Units (YPG) when militants destroyed a tank. After earlier media reports, the state-run Anadolu news agency confirmed the tank attack. But the location and the exact time of the attack were not disclosed.

YPG previously released photos of other tanks being hit by rockets as well. Saturday marked the deadliest day for the advancing Turkish troops. The total death toll rose to 14.

The state-controlled media portrays a steady advance against YPG-held areas, reporting the capture of new villages and hills on daily basis. But except the takeover of strategic Mount Burseya, gains have appeared to be modest so far today.

Turkey has launched an assault against the Kurdish fighters in Afrin with much fanfare on Jan. 20., launching airstrikes and shelling of Kurdish targets.

The Turkish military says 897 militants have been neutralized, though it is hard to verify the numbers. The British-based Syrian Observatory of Human Rights, however, say more than 60 civilians were killed in Afrin.

President Erdogan and pro-government media have chided the U.S. for aligning with Syrian Kurdish militia, which Turkey unflinchingly sees as terrorists due to their links to a domestic insurgent group, Kurdistan Workers’ Party (PKK).

The Turkish military has locked in a decades-old fight with PKK over the latter’s unrelenting quest for self-rule inside Turkey.

The U.S. supply of anti-tank missiles, armored vehicles and other weapons to YPG-dominated Syrian Democratic Forces (SDF), a coalition of fighting groups combating Islamic State, met with contempt and trepidation in Ankara, leaving Turkish authorities perturbed over the emergence of a well-armed militia force they view as a serious threat.

Last month the U.S. announced a plan to form a new border force. It led to an upsurge of animus and breakdown of trust among Turks; and subsequent U.S. efforts to proffer a new definition of the force have not found a receptive audience in Ankara.

What once seen unimaginable, Turkey’s threat to expand offensive toward Kurdish-held Manbij placed the specter of an unwitting confrontation between two NATO allies within the realm of possible. Despite attempts from both sides to defuse embers of tension, the risk of an accidental clash has still not receded.

The intriguing part of the problem stems from the fact that Turkey’s military objectives remain opaque and elusive to its allies. What is the end point or whether Mr. Erdogan would honor its pledge to attack Manbij, home to 2,000 U.S. special forces, is a matter of great diplomatic as well as military controversy with so many elements at stake.

Deputy Prime Minister Bekir Bozdag reiterated Turkey’s warnings that the U.S. military units could be inadvertently dragged into a clash with Turkish forces if they wear YPG uniforms.

“If they [YPG] do not withdraw from Manbij, then we will go to Manbij,” he said. He underscored that Turkey wants no clash with the U.S. forces.

“But the U.S. has to be aware of Turkey’s sensitivities,” he went on to say in a televised interview with broadcaster CNN Turk. “If the U.S. troops wear terrorist uniforms or are present among the terrorists during an attack,” he warned, “then it would be difficult to make a distinction [between them and YPG militia].”

Pentagon officials have renewed their unswerving commitment to the anxious Kurds in Manbij who dread a potential assault from Turkey.

The Turkish operation against Afrin has already had pernicious effects on a fraying relationship and is further bound to fracture whatever bonds remained between the two.

As more and more Turkish tanks are destroyed by YPG militia, prospects for containing the looming risk of a breakdown in ties are not promising. Already pro-government journalists press for the shutdown of Incirlik Air Base for U.S. air warplanes after Saturday attack.

The question still remains pertinent. Will Turkey test the U.S. commitment to Kurds in Manbij by attacking the city or just keep its operation limited as initially announced?

It depends on mounting casualties of Turkish soldiers, the shifting balance on the ground, the growing anti-American sentiment among the Turkish public, and on Mr. Erdogan.

In a phone call on Saturday, President Erdogan offered reassurance to his French counterpart Emmanuel Macron over the military operation and said Turkey has no aim over the Syrian territory.

Earlier last week, Mr. Macron warned Turkey that its operation against the militia should not turn to a large-scale and lasting military presence in northern Syria.