After an influential lawmaker from the ruling Justice and Development Party (AKP) hinted possible exclusion of the newly established opposition IYI (Good) Party from June 24 snap elections, the party spokesman dismissed debates over its eligibility and released a document showing that it is among the parties which will take place in the elections.

AKP lawmaker Mustafa Elitas who is also the party’s parliamentary group deputy chairman hinted that Good Party is not legally prepared for joining June 24 elections and urged them to prepare for the next elections. His remarks set the stage for a bitter political standoff between the government and the nationalist opposition party.

Good Party was found last October and held its first party congress in December. According to the Turkish electoral law, six months must pass for a party since its first congress to be able to take part in elections. It also has to complete founding its local branches at least 41 provinces out of Turkey’s total 81 provinces.

The state of Good Party was a matter of political controversy since President Recep Tayyip Erdogan’s announcement for snap elections on June 24. The move caught the opposition off guard and unprepared.

Good Party Chairwoman Meral Aksener said her party presented its files and documents to the Office of Supreme Court’s Chief Public Prosecutor responsible for political affairs. She claimed that her party got approval from Supreme Court.

But Elitas dismissed that and Good Party would only take part in next elections.

The exclusion of the party would taint the legitimacy and integrity of the elections.

His remarks unleashed a squabble over how to interpret Good Party’s documentation of its founding.

The leak of Good Party’s application to the Supreme Court appeared in pro-government media. It presents a bleak picture for the new opposition party, which was found after Aksener broke away from Nationalist Movement Party (MHP), Erdogan’s new ally.

According to the document featuring the Supreme Court’s response to the party, Good Party fails to prove that it held its first congress on Dec. 10. It also failed to show that it had any local party branch, national organization during the time when it first sent documents to Higher Education Board (YSK) last December. It practically means that, despite Aksener’s reassurances to her supporters, the party cannot take part in June 24 elections.

After Erdogan’s election move on Wednesday, Aksener said her party is ready to join any election from June 10 forward on.

But the technical side of the debate appears to bound to prolong further. 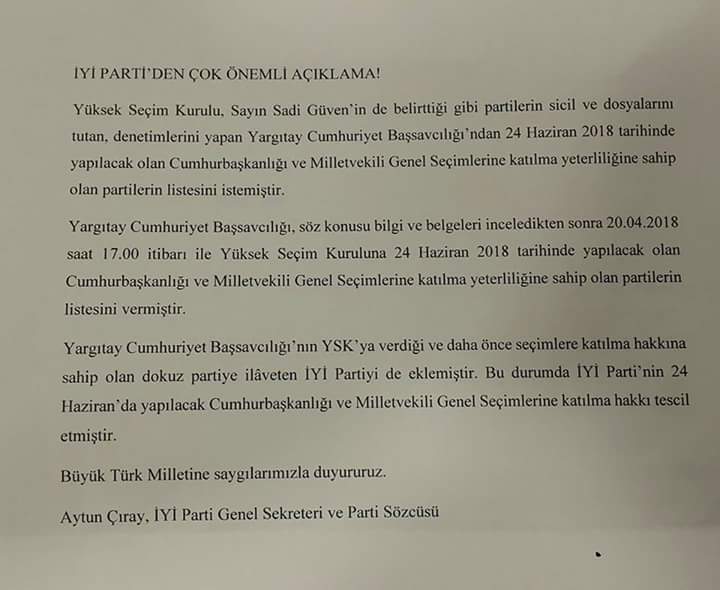 Later on Saturday, however, Good Party released another document showing YSK’s list to Supreme Court, which contains the names of parties that will take place in June 24 elections. YSK named Good Party among them.