President Recep Tayyip Erdogan sealed a decisive victory with more than 52 percent of the votes in the critical presidential elections in the first round, and set to rule Turkey for another five more years in a new system that increased his powers at the expense of the legislative body.

Despite expectations for a last-minute upset victory, the opposition’s own election observation group confirmed results after more than 96 percent of the votes counted. Objections for a fraud and manipulation at the ballot box later dissipated as Republican People’s Party (CHP) presidential candidate conceded defeat, FOX Haber reported.

President Erdogan even did not wait for Supreme Election Council (YSK) to officially announce the results and delivered a victory speech while the tally continues on Sunda night.

Turkey’s state-run Anadolu news agency previously portrayed Erdogan as the victor in the presidential election, with the opposition disputing its report, challenging the figures appearing on pro-government and state media.

President Erdogan got 53 percent of the votes, while his main contender CHP candidate Muharrem Ince received 31 percent in a bitter contest with 99 percent of the votes counted. The opposition hoped that Erdogan might have fallen below 50 percent, so the elections would proceed to the second round.

But such expectations proved to be misplaced, with the president sealing his victory.

Leaders of friendly countries and former Prime Minister Ahmet Davutoglu congratulated Erdogan for the result even well before the official announcement by Supreme Election Council (YSK).

Turkish people went to polling stations on Sunday to cast their vote to elect a new president and parliament.

President Erdogan delivered his signature balcony speech from the AKP headquarters in Ankara in early hours of Monday. He thanked the nation.

YSK President Sadi Guven confirmed that Erdogan won presidential elections and his ruling party, along with nationalist MHP, won the majority in Parliament.

CHP Spokesman Tezcan disputed Erdogan’s claim for victory and said there are millions of votes to be registered to the system at YSK headquarters. He put Erdogan’s vote around 51.77 percent.

President Erdogan delivered a victory speech a presidential residence in Istanbul and thanked the Turkish people for re-electing him.

He said he will not leave the job until he makes sure that Turkey becomes among the top ten economies of the world.

CHP spokesperson Bulent Tezcan announces that Anadolu news agency manipulates results. He declares that the presidential election goes to the second round.

President Erdogan began to receive congratulations over what he says “his election.” Azerbaijan President Ilham Aliyev and Nationalist Movement Party (MHP) Chairman Devlet Bahceli called the president to convey their congratulatory remarks even well before the vote tally did not end.

“CHP and its candidate who understood their defeat even before the opening of the boxes, now threaten YSK and Anadolu news agency.”

“AA did not wrong or incomplete information neither in this polls nor in the previous ones. The counterclaim is obviously [an act] of smear against AA,” he said.

With 55.6 percent of the boxes opened, Erdogan gets 53.53 percent of the votes over his main rival Ince who gets 29.88 percent, according to Fair Election Platform.

According to Fair Election Platform, the results as follows with 37.8 percent of the votes counted:

According to Anadolu news agency, which drew the ire of the opposition parties over its reporting, pro-Kurdish HDP passes the electoral threshold. As 75 percent of the votes counted, it gets 64 seats. This means Erdogan’s ruling AKP will not be able to secure the majority in Parliament and will not be able to form a single-party government.

HDP Supporters in Istanbul celebrate party’s going over %10 national threshold and winning 64 seats as of now when % 75.5 of the votes counted pic.twitter.com/OAChiONiO1

Turkey’s opposition party members have been enraged by what they say manipulation of the state-run Anadolu news agency. Pro-Kurdish HDP lawmaker Garo Paylan said HDP is passing electoral threshold according to the data at the party’s disposal.

He urged his party officials remain at ballot boxes to monitor the vote tally with avoiding demoralization. 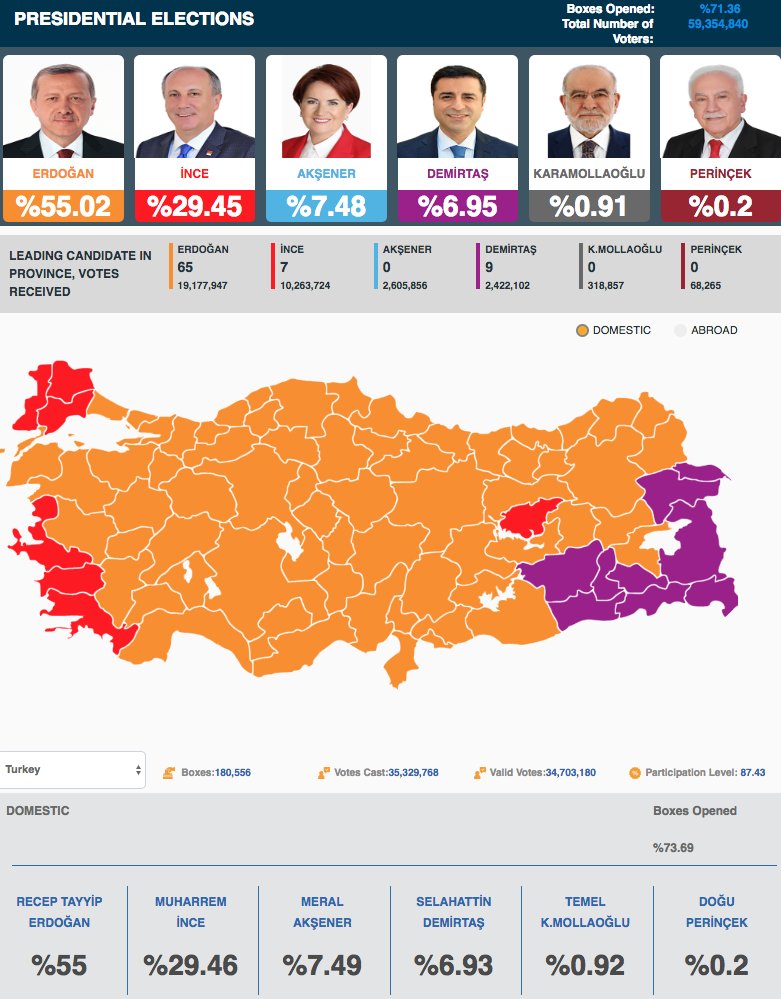 CHP presidential candidate Muharrem Ince accused Anadolu of manipulating the results. He says that Anadolu registring the results first in places where Erdogan got the highest votes. He urged CHP’s election officials and monitors to never abandon ballot boxes and do not let their morale down.

According to results from CHP headquarters for presidential elections:

“They begin at 70 percent [in presidential elections] and drop at 51 percent,” Tezcan told media. He noted that the news agency repeats the same tactic employed during last year’s referendum, beginning with higher figures, only to give 51 percent at the end of vote count.

Anadolu Agency will begin at 70 percent (of the vote) and call it quits at 51 percent,” Tezcan said.

According to Anadolu news agency, here are the results in Izmir, secular CHP’s stronghold.

Access to the official website of the High Election Council (YSK) as well as Eksisozluk, Turkey’s largest social media platform were down for several hours on June 24, 2018.

The two websites went offline during the day and the access is yet to be recovered.

In the eastern province of Kars, there is a power outage. Pro-Kurdish HDP Spokesman Ayhan Bilgen says real results have no correspondence with what state-run Anadolu news agency announces on TVs.

Fair Election Platform issued a statement and called on citizens not to be deceived by manipulative results on TV channels:

“The results currently on TV screens do not reflect the reality. We request you to not to be deceived by manipulated data but wait for the results we will explain. We continue to pay attention to boxes.”

The results currently on TV screens do not reflect reality. We are asking you to wait for the results t we will explain to the manipulated data. We continue to own the boxes

According to Anadolu, President Erdogan’s ruling party and its electoral alliance with nationalist MHP gets 67.55 percent while the opposition alliance gets 23.27 percent after counting 8 percent of the boxes.

According to preliminary results, President Erdogan gets the 59 percent in presidential elections after 22 percent of the votes were counted, Anadolu news agency reported.

After voting ended, CHP candidate Ince held a press conference in front of YSK and urged his supporters to be working to ensure that there is no elections fraud. He slammed state-run Anadolu news agency and said the nation will determine the results, not the agency.

Ince: “We will not let Anadolu Ajansi dictate this result… whatever happens, we will win this. Do not abandon the ballot boxes.” #Seçim2018 #TurkeyElection pic.twitter.com/GhNwhDog3a

Two days ago, controversy broke out when leaks revealed in media that President Erdogan’s son-in-law and Energy Minister Berat Albayrak instructed the news agency how to announce the elections results.

According to the opposition, he expected Anadolu to declare that Erdogan won with 52 percent of the votes from the very beginning. Both AKP government and Minister Albayrak rejected claims.

But fears have not dissipated over potential attempts for voter fraud and tampering with the results.

CHP lawmaker Baris Yarkadas shared a number of pictures on his Twitter account. He said roads heading to YSK headquarters in Ankara has been blocked by trucks for unknown reasons.

CHP candidate Ince previously said he would be following the results in front of YSK office to make sure that there is no fraud.

Hundreds of CHP supporters gathered near the YSK headquarters in Ankara. Turkish anti-riot police called on people to disperse or otherwise face police intervention to break up the crowd.

— In a violent event broke out between rival party members in the eastern province of Erzurum, nationalist Good Party official Sadik Durmaz and two others have been killed in a gunfight. Good Party Erzurum provincial branch head confirmed the tragic event.

— Polling stations were closed at 5.00 pm and the vote count will soon begin. It started in eastern Turkey.

Where Leaders Cast Their Vote

Basak Demirtas, the wife of jailed presidential candidate Selahattin Demirtas, cast her vote at a polling station in the southeastern province of Diyarbakir early on Sunday morning. 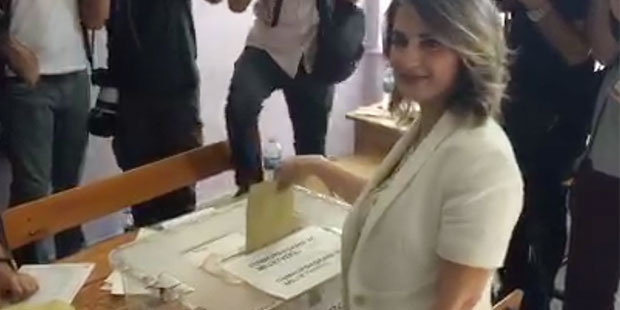 President Erdogan cast his vote in Istanbul’s Uskudar district where his residence is located. He said the presidential system will elevate Turkey to the advanced level of civilized countries. 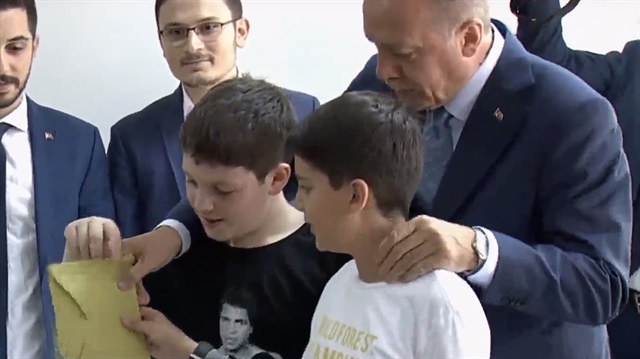 Erdogan also praised the level of participation in the elections.

Ince cast his vote in his hometown of Yalova in the afternoon. After the vote, Ince headed to Ankara to follow the election result from his party headquarters. 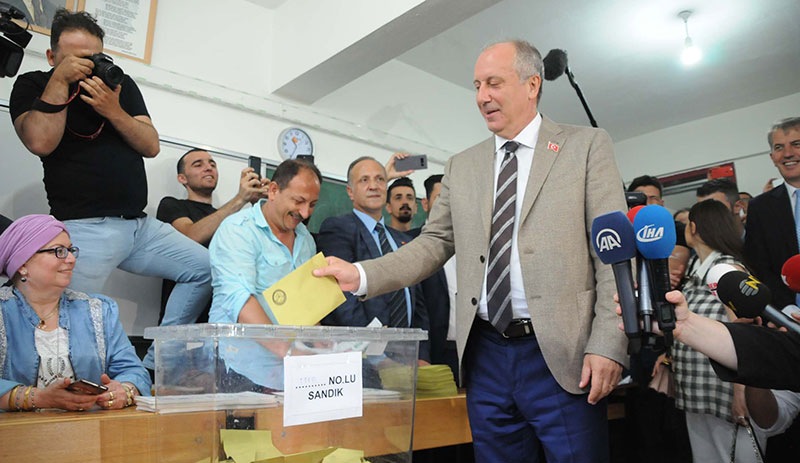 Turkish military chief Gen. Hulusi Akar also went to a polling station in Ankara to cast his vote. Although Gen. Akar did not make any political comments during the campaign period, his visit to former President Abdullah Gul at the request of Erdogan to persuade Gul to withdraw his candidacy generated a political controversy over his meddling in political affairs.

He did not tell media members anything about the color of his vote. 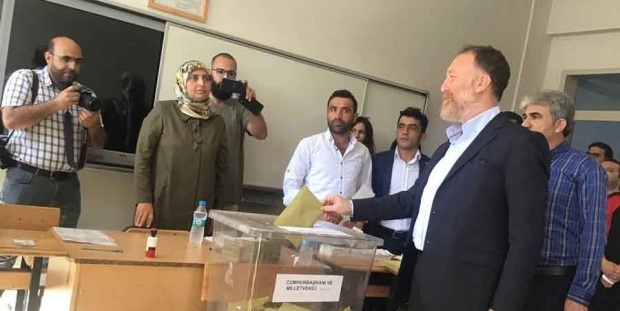 Pro-Kurdish People’s Democracy Party (HDP) co-chair Sezai Temelli went to cast his vote at a polling station in the eastern province of Van. He said his party will work diligently against efforts of voter fraud by the government. 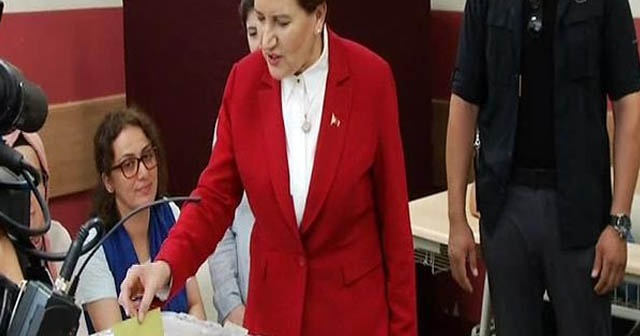 Good (IYI) Party leader and presidential candidate Meral Aksener cast her vote in Istanbul. She said the elections would bring a brighter Turkey. 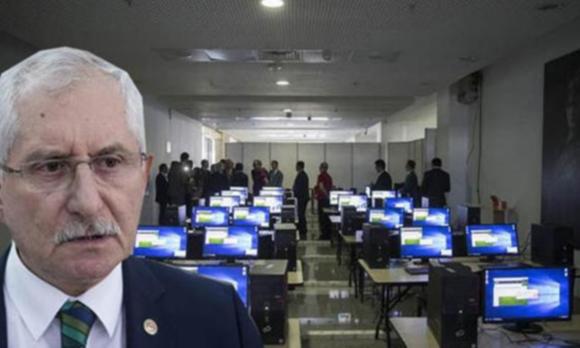 YSK Head Sadi Guven told media members that every security measures have been taken in case of power blackouts and other disturbances at polling stations. Along with an observing delegation from Shanghai Cooperation Organization (SCO), he visited ATO Congress Center in Ankara to inspect the latest preparations for vote counting and other procedural works after voting ends at 5:00 pm in Turkey.

He said he expects to announce the results before midnight.

— After a decision by Higher Election Council (YSK) to move ballot boxes in certain villages and towns in southeastern Turkey, military helicopters transferred the boxes to places designated by authorities. 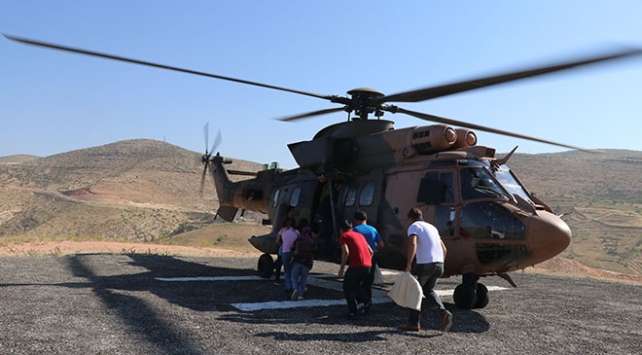