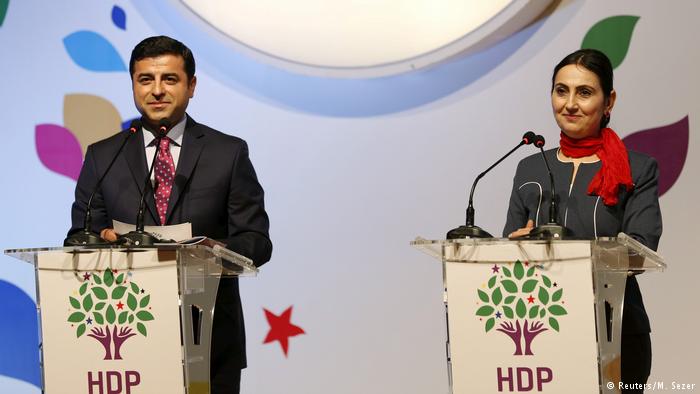 Turkey’s democracy is on trial once again. It went unnoticed by the majority of Western media that the leaders of the second largest opposition party, the Peoples’ Democratic Party (HDP), faced their court hearings in February 2018. The co-chairs of HPD, Selahattin Demirtas and Figen Yuksekdag, were arrested in November 2016 on charges of terrorism and insulting the personality of President Recep Tayyip Erdogan.

An international delegation of politicians, human rights lawyers, journalists, and political activists (including British and Irish MPs), went to observe the trial but refused entry to the court on the grounds of being a ‘security threat’. While silencing the democratically elected representatives of an oppressed ethnic minority raises serious questions about the nature of Turkey’s human rights and democratic progress, it also highlights some Western governments’ similarly hypocritical policies.

Since its establishment in 2012, the pro-Kurdish HDP has been an advocate of a democratic, egalitarian, and inclusive society. Its aims should have served as an inspiration to those seeking political pluralism, progressive reforms, social justice and democratic change for Kurds in Turkey and the Middle East. However, the arrests of the democratically elected HDP leaders, and other officials from its regional sister party, the Democratic Regions Party (DBP), are not only an attack to their basic rights for freedom of expression and political participation but violations of the rights of all of the constituents who voted for them. As Hugh Williams, Europe and Central Asia Director at Human Rights Watch, said:

“It’s deeply damaging to Turkey’s democracy that the government is locking up the leaders and MPs of an opposition party that received five million votes in the last election. … The fact that the curbs come during a vital national debate about the country’s future is doubly disturbing.”

Following the failed coup attempt in July 2016, President Erdogan, and the AKP government increased their powers under the State of Emergency (OHAL) during which most democratic norms and rule of law have been suspended. Over 50,000 people were put in pre-trial detention on charges of terrorism and membership to the Gulen Movement – designated as the Fethullah Gulen Terrorist Organization (FETO) by the government. The government placed the blame for the failed putsch on the group. Ever since Turkey’s National Parliament has become increasingly dysfunctional.

The president now has the right to issue decrees that entail the power of law, making amendments without formal debate in Parliament, only requiring the approval of the cabinet. Another key amendment to the Law of Municipalities was Decree (no. 674) passed on Sept. 1, 2016. This amendment permits the takeover of municipalities suspected of supporting terrorism by the central government. By doing this, the AKP government not only nullifies the local elections of 2014, but also confirms the end of the Kurdish peace process; as the HDP stands accused of being a proxy platform of the Kurdistan Workers’ Party (PKK) since 2015.

Internationally, the impact of the deterioration of Turkish democracy has reached unimaginable levels under the AKP rule. Turkey is a signatory of many international human rights documents, including the U.N.’s Universal Declaration of Human Rights (UDHR), and the European Charter of Local Self-Government. Article 10 of UDHR states, that: “everyone is entitled in full equality to a fair and public hearing in the determination of his rights and obligations and of any criminal charge against him.”

Moreover, Article 11 adds that: “everyone charged with a personal offense has the right to be presumed innocent until proven guilty according to the law in a public trial at which he has had all the guarantees necessary for his defense.” By detaining and arresting the democratically elected leaders of political parties and mayors of local municipalities, Turkey is violating the rule of law, the democratic rights of Kurds for the political association, and local self-governance.

The evidence of systematic attacks on the basic democratic rights of Kurdish people in southeastern Turkey follows:

— Mayors in 94 of the 103 municipalities controlled by the DBP have been suspended from office on alleged suspicion of ‘terrorist’ offenses, and the municipalities have been taken over by state-appointed provincial ‘trustees’.

— The powers of elected councils have been suspended; city councils are not allowed to meet, and tens of thousands of municipal employees have been dismissed.

— Lastly but the most important, all women’s centers, programmes, and facilities have been closed in the ‘trustee’ governed municipalities.

While new wave of social movements (i.e. #metoo and #timeisup) related to the perpetual issues of gender equality are taking place in the West, similarly crucial aspects of the Kurdish people’s struggle for equality have not gained such support or momentum. Many of the detained Kurdish local politicians have women as co-chairs and co-mayors. One of the most inspiring aims of the HDP was gender equality, clearly so as the HDP declared itself the ‘party of women’. Women hold 50% of all political participation rolls and the HDP initiated the creation of multiple women centers and special programmes for those suffering from domestic violence and abuse. All of these centers are now closed, and the co-mayoral system has been declared illegal by the Turkish government.

However, the movement for equality and representation has not lost all its spirit. For instance, Gultan Kisanak, the co-mayor of Diyarbakir, a city with a majority Kurdish population, is still an outstanding champion of women rights. Even though she now faces 230 years of imprisonment, she still not afraid to say that, ‘without local democracy, there can be no democracy.’ It is evident that the government’s attack on the HDP is not only a regressive move against the Kurdish people as an oppressed ethnic minority but also against gender equality and women rights.

The arrests and trials of the Kurdish co-chairs and co-majors cast deep pessimism over the future of Turkey’s democratic rule with respect to minority rights, gender equality, and just society. The EU, the U.K. and the U.S. governments can no longer justify turning a blind eye to the Turkish government’s violation of rule of law and basic rights of Kurdish people.

Without equality, justice, and local self-government functioning properly, Turkey cannot be regarded as a real democracy. However, under the AKP rule, change cannot come from within Turkey itself. It is time for Western democracies to stand in solidarity with the jailed Kurdish politicians, and support the democratic aspirations of Kurds in Turkey.

After US Embassy Closed in Ankara, Turkey Detains ISIS Suspects in Raids