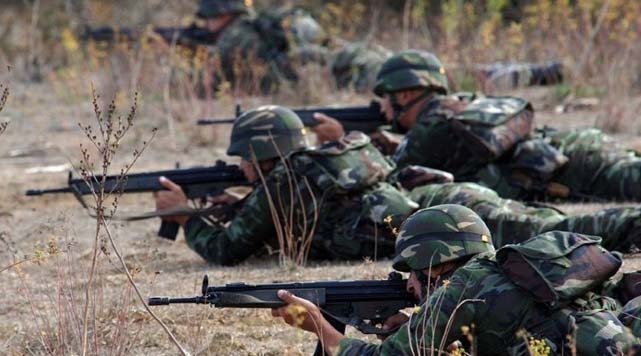 For decades, Qandil mountains have provided a protected sanctuary to the Kurdistan Workers’ Party (PKK) leadership in northern Iraq. The PKK, which has been fighting against the Turkish state for self-rule in southeastern Turkey more than three decades, still has its headquarters in the mountainous, rugged and near-impregnable terrain. It has repeatedly become a target of intense air bombardment by the Turkish fighter jets.

For more than a week, senior Turkish leadership is signaling a major operation to dismantle the PKK headquarters.

“We have neutralized thousands of terrorists both at home and abroad, and now are removing Qandil as a threat and source of terrorism for our country and nation,” President Recep Tayyip Erdogan said on Sunday.

He said Qandil’s turn arrived and Turkey would eventually eliminate the PKK’s stronghold. The Turkish military has intensified the bombing of suspected PKK hideouts across the region while Turkey is braced for both presidential and parliamentary elections on June 24.

“The attack is related to the election campaign and is a blatant effort to play the card of distracting from domestic problems like the collapsing economy by engaging in external military distractions,” Francis O’Connor from Frankfurt-based Peace Research Institute told Globe Post Turkey.

However, the PKK has begun to withdraw its forces from Shengal/Sinjar since last month. In any case, they had only a very small minority of their fighters there and Qandil has remained its central base, he noted.

Turkey hinted new efforts to ensure cooperation with regional countries and the U.S., a key player in Iraq and Syria, before closing in on the Qandil mountains overseeing Erbil, the capital of Kurdistan Regional Government (KRG).

“There will be a four-way cooperation between Turkey, the U.S., Baghdad and Erbil [against PKK]. Because PKK is also an enemy of Erbil,” Turkey’s Foreign Minister Mevlut Cavusoglu said at a press conference in Antalya on June 5.

The KRG, which had cultivated close ties with Ankara in prior to its botched independence referendum last year, tries to set aside the discord over the vote. It accuses PKK of paving way for Turkish military incursions to northern Iraq.

The Turkish military has bases and forces in varying degree and form in northern Iraq since the end of the First Gulf War in 1991 when the PKK found a space to flourish and expand its activities, bases near Turkey-Iraq border.

“From what I know, the original plan by the Turkish army was to hold a number of mountain passes which the PKK uses, to disrupt their ability to ferry fighters down into Turkey for the “fighting season.” They have made several efforts to do similar things in the past but this seems to be a more substantial mobilization than previous ones,” O’Connor said, elaborating the motives that drive the latest Turkish push.

Turkey in this spring deployed commandos to set up new bases and outposts in northern Iraq. Military expert Metin Gurcan reported for Al-Monitor in April that Turkey sent special forces to Sidekan, which is a critical passage to Turkey from the PKK-controlled Qandil and Hakurk regions.

With the deployment of commandos, Turkey has two objectives, Gurcan noted. “The first objective is to eliminate the PKK’s setup at Sidekan that allows its fighters to infiltrate Turkey. The other goal is to ensure 24/7 domination of this area by using the temporary military bases until fall.”

According to O’Connor, there are other factors at play for operations as well. He pointed that in addition to the election, the timing is also related to the perceived weakness of the PKK after its sister forces (SDF- YPG/YPJ) unsuccessful effort at repelling the Turkish army and allies in Afrin.

“The Turkish regime is also aware that the KRG is in a moment of exceptional disorder and chaos and is not in a position to really mount any kind of diplomatic offensive against the invasion. Plus, the TSK is slowly kind of re-constituting itself after the purges of the post-coup period and this escapade can give it a mission and something to focus on.”

“But,” O’Connor added with a caveat, “I do not think they are under any impression that they can uproot the PKK from Qandil, the terrain is ideal for guerrilla warfare.”

He argued that the Turkish forces tried before and were always repelled easily. “I would imagine that this is a chance to launch a relatively big showy operation in the knowledge that it will not receive any international condemnation and will eventually withdraw back to the Turkish borders claiming some victory or other without really undermining the PKK’s forces to any significant extent.”

The PKK launched its insurgency against the Turkish state in 1984. Since then, it is fighting a guerrilla warfare in an evolving form. After June 2015 elections, the PKK brought the war to urban areas in cities. The latest phase of conflict laid waste to residential areas in many cities and provinces across southeastern Turkey, displacing nearly half a million people.

The PKK drew ire of the local population and, despite its expectation, failed to arouse mass uprisings and revolts by people in cities. When the PKK fighters dug trenches and built barricades in certain neighborhoods in Diyarbakir, Sirnak, Nusaybin, and Cizre, it invited the security forces, which used artillery, tanks and massive firepower to crush the militant group.

Prime Minister Binali Yildirim said the Turkish troops are 25 to 30 kilometers deep inside northern Iraq, advancing toward Qandil mountains. But O’Connor said it can be misleading. It is not a question of kilometers but holding mountain passes etc., he underlined.

“As regards its practical meaning, I do not believe that Qandil will be taken over but there will likely be some interruption of PKK access routes,” he said, expressing skepticism over the stated target.

According to him, the looming operation would not have any major impact on the KRG-Turkey relations because the KRG is totally reliant on Turkey if it is to maintain any connection to the outside world if it is not to avoid going through Baghdad. He added: Plus, the KDP and to a lesser extent the PUK have deep problems with the PKK, and they have well-grounded fears about growing sympathies for the PKK in the KRG after its role in fighting ISIS and its heroics with the Yezidis.

Turkey set the Qandil goal as an ultimate step to “drain the swamp of terrorism.” But whatever it expects from the operation, its fallout or implications for the theater in northern Syria would be limited.

To O’Connor, YPG & YPJ, the Syrian Kurdish militia, is more or less militarily autonomous from the Qandil. For this reason, an operation there would not necessarily have any military impact on the course of the conflict in Syria.

Turkey sees the PKK and its Syrian affiliation YPG as one and same organization.