A day after his father urged to drop playing for the German national team after facing a barrage of criticism from pundits and media members for poor performance at the World Cup in Russia, German star Mesut Ozil has decided to retire from international career following a controversy triggered his photo with the Turkish president last month.

Arsenal midfielder Ozil, who along with Manchester City star Ilkay Gundogan became the target of public criticism in Germany over posing a photo with President Recep Tayyip Erdogan in London last month, again found himself at the center of national debate.

This time he drew criticism for his sloppy performance in Russia where Germany suffered a humiliating defeat when it failed to reach the knockout stage, the first time since 1938. The shocking ejection sparked soul-searching for the last World champions.

When Ozil came to media spotlight again, his father shrugged off the criticism as unfair. He said the media singled him out and scapegoated Ozil for the collective failure of German national team.

“If I were in his place, I would say: Thank you, but that’s enough,” Mustafa Ozil told German media.

The son Ozil drew the ire of German football establishment and politicians when he presented his jersey to Erdogan as a gift and stood for a photo in London.

The father said it was not the first photo. He defended his son’s narrative, saying that the photo was not a political statement from Ozil.

“He had it taken out of politeness. Mesut is a reserved person, almost shy, how could he have turned down a photo if a man like Erdogan asks him?” the father told BILD newspaper. 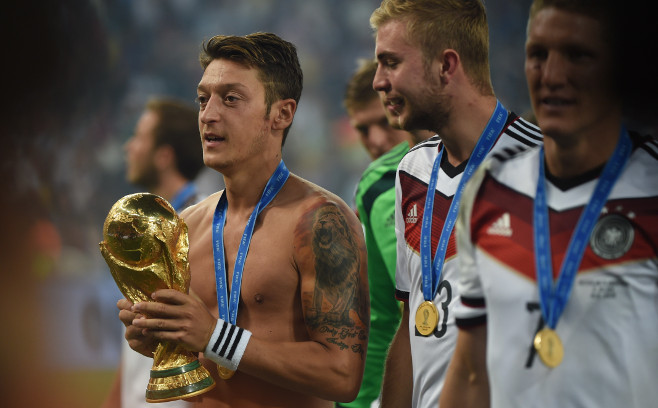 The father underlined that his son did a lot for the national team and became a champion with Germany four years ago.

Our colleagues at @SkySportDE
tell us they believe Arsenal's Mesut Ozil will not be playing again for Germany. Erdogan fallout has burnt all bridges. Full story to follow on @skysportsnews #AFC

According to Sky Deutschland, Mesut decided to end his Germany career. He scored 23 goals after 93 caps with the German team, providing the most assists until today. As of 2017, he provided 37 assists in 86 matches.