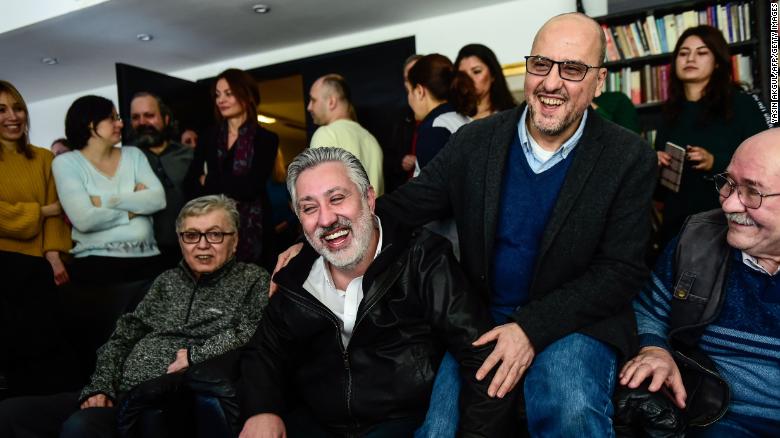 An Istanbul court on Friday ordered the release of two more journalists in the trial on terror-related charges of staff from the opposition Cumhuriyet newspaper seen as a test of press freedom under President Recep Tayyip Erdogan.

Cumhuriyet’s editor-in-chief Murat Sabuncu and investigative reporter Ahmet Sik, who had both spent well over a year in jail, were ordered to be freed by the judge after a marathon day-long hearing.

However, they remain charged and on trial. One more detained suspect, the paper’s chairman Akin Atalay, was ordered to stay in jail. The three were the last remaining suspects in the case to be held behind bars ahead of a final verdict, leaving Atalay the sole suspect still behind bars.

A total of 17 staff from Cumhuriyet (Republic) face terror charges in the trial, which opened on July 24. Others have been gradually freed over the last year. It is still not clear when the final verdict will be announced. The formal releases are expected to take place later Friday. The next hearing in the trial was set for March 16 and the suspects still face up to 43 years in prison if convicted.

Sabuncu and Atalay have spent the last 495 days in jail and Sik, who was detained a little after the initial wave of arrests, 434 days.

The verdict delivered at the courthouse in Silivri outside Istanbul, part of a complex that also contains the prison where they are held, was greeted with cheers from supporters in the courtroom. Sik could be seen weeping with emotion.

Also present were the defendants who were released last year after long stints in jail but remain charged, including cartoonist Musa Kart and columnist Kadri Gursel.

There was tension ahead of the opening of the hearing as anti-riot police with shields prevented supporters from giving statements to media in front of the courthouse.

In the end, some managed to read brief statements in front of the line of police calling for the release of the staff.

“It is unacceptable for journalists to stay in prison that long just because they express their thoughts or publish headlines,” Utku Cakirozer, an MP for the opposition Republican People’s Party (CHP), told AFP.

Unable to read his statement closer to the courthouse, fellow CHP MP Sezgin Tanrikulu added: “Justice cannot emerge out of this place but we are still here for our friends.”

The latest hearing came a day after an Istanbul court sentenced 25 journalists to prison terms of up to seven and a half years over links to the group of US-based preacher Fethullah Gulen who is blamed by Turkey for the 2016 failed coup against Erdogan.

The Cumhuriyet staff are charged with supporting through their coverage three organizations Turkey views as terror groups — the Kurdistan Workers’ Party (PKK), the ultra-left Revolutionary People’s Liberation Party-Front (DHKP-C), and the Gulen movement.

25 Turkish Journalists Were Sentenced to Prison in Mass Media Trial