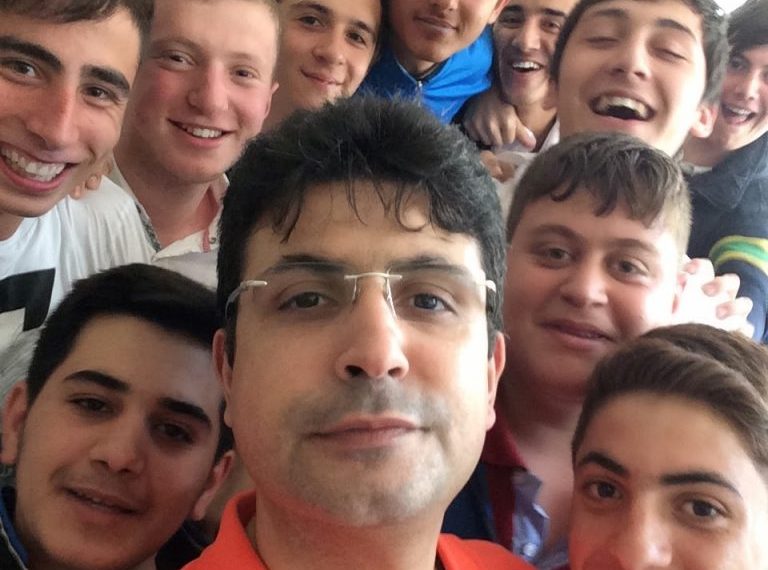 Gokhan Acikkolu, a teacher of history in Istanbul High School, was detained in the aftermath of the botched coup in July, 2016. He was one of the tens of thousands of people remanded by police over alleged or perceived links to Gulen movement.

He was tortured to death after13 days of incessant beating by police during his detention in custody. He was referred to an Istanbul hospital two times and taken to intense care unit.

When he was brought to the hospital last time for the emergency, the doctor declared his death. The agony of his family did not end there. For several days, authorities refused to give the body to the family. The Directorate of Religious Affairs refused to send an imam for funeral ceremony and Istanbul Mayor Kadir Topbas even pondered burying him in “the cemetery of traitors,” a brief practice introduced by the government to punish coup plotters, but a policy later expanded to include all those arrested in the post-coup crackdown.

When his family retrieved his body, they went to the village he was born in the central province of Konya. Residents in the village also opposed the burial of the teacher in the village cemetery. He was secretly and silently buried somewhere else, without a funeral or any other religious ceremony.

The way how he died and the way how he was posthumously treated ignited a bitter controversy then, in August 2016.

But his story has not ended there. On Tuesday, Turkey’s Education Ministry reinstated him into his post after a court decision found him not guilty of the charges directed against him.

That unleashed a torrent of comments on social media as the news went viral.

“I really find it relevant for a government to deflect their share of the blame and refuse responsibility in the death of the teacher who was killed by torture in custody and whom they wanted to bury in a “cemetery of traitors” by trivializing the way how he died. They nonchalantly and indifferently talk as if he died in a normal way,” a writer and editor told Globe Post Turkey.

“I would be very surprised if they would do justice,” said the writer who declined to be named for this article for fear of retribution in Turkey.

Thousands of people expressed outrage after the news about the reinstatement of Gokhan teacher. His personal story became emblematic of the gross rights violations, arbitrary detentions and brutal police treatment of detainees, all the hallmarks of the post-coup era Turkey.

But his case particularly struck the nerve, touching off an ongoing debate in public as well political landscape.

Gokhan’s Path From School to Prison

An anonymous tip landed the history teacher in one of the most notorious departments of Istanbul Counter-Terrorism headquarters where dangerous criminals, terror suspects and crooks have been kept for interrogation. Police raided his home and detained him on the charges of terrorist organization membership, a typical accusation that directed against tens of thousands of people with little or scant evidence, and without due process.

According to the Cumhuriyet report, he was terribly beaten by police who hit his head to the walls, broke his ribs and bones. He himself told doctors when he was first brought to the hospital that he repeatedly received punches to his face, slaps and tackles to his body.

The teacher who had been previously suffering diabetes, other illnesses and blood pressure was not allowed to access his medicines during his detention. After so much beating, he had a heart attack. Doctors from Institution of Forensic Medicine (ATK) failed to resuscitate his failing heart. When he was taken to the hospital, he was declared dead.

The Acikkolu family went to ATK to take the deceased teacher’s body but faced inhumane treatment from authorities who told the grieving family members that the corpse would be delivered only on the condition that he would be buried in the “cemetery of traitors.” There was no official charge against the slain teacher nor an indictment. He was not even questioned by a prosecutor.

The family brought Mr. Acikkolu’s corpse to their village in Konya with their own vehicle.

While the inconclusive investigation into how he died under custody has hit snags repeatedly, the Education Ministry reinstated the deceased teacher back to his post after an administrative and legal probe against him found the teacher innocent. 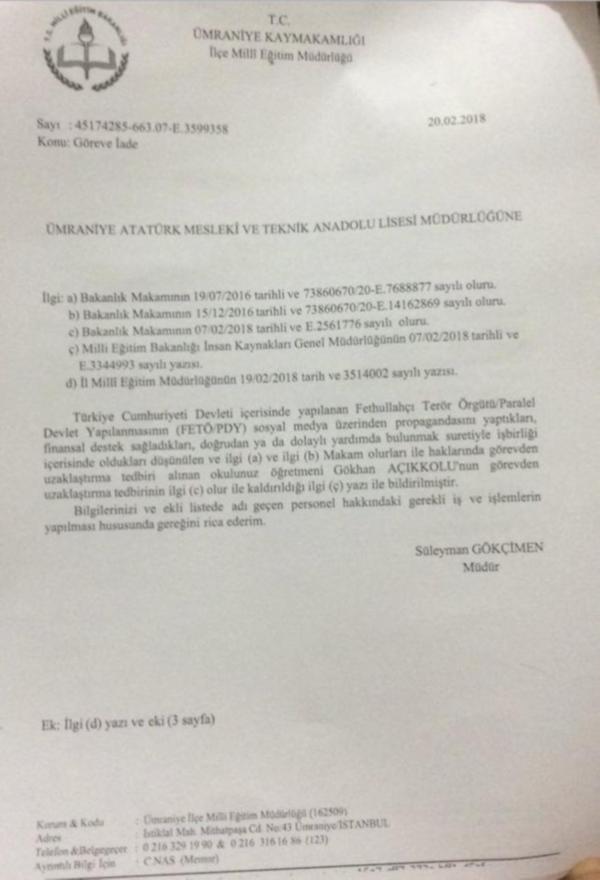 A decision by the Education Ministry on Feb. 7 was forwarded to the slain teacher’s wife. In the document, the principal of the school received an order explaining that the suspension against the teacher over his alleged support of Gulen Movement has been revoked and dropped.

It met with consternation and cynical response from people who were taken aback by the palpable display of injustice.  For many people, it was too little, too late. 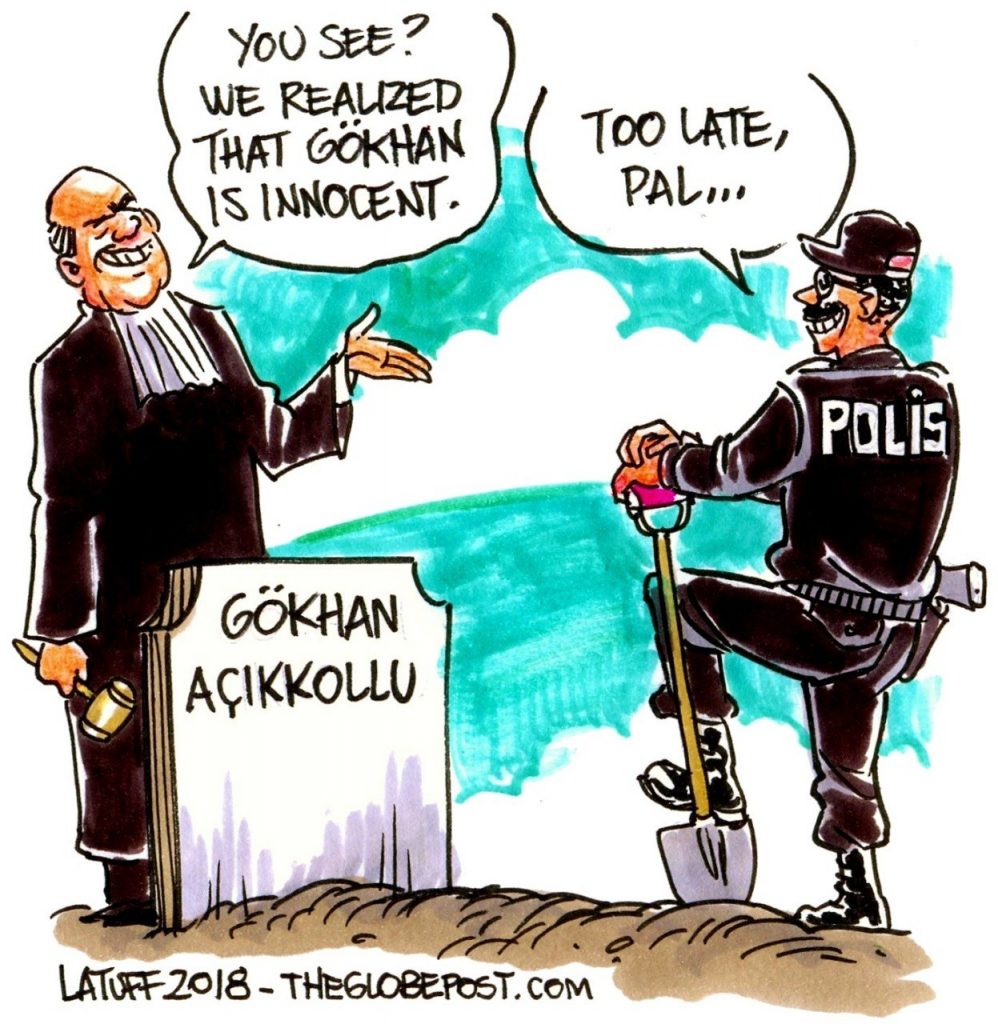 Education Ministry Undersecretary Yavuz Tekin rebuffed the public criticism and said the reversal of suspension took place upon the death of the teacher. Appearing unapologetic and unrepentant, he defended the initial decision against the teacher and explained that since Mr. Acikkolu is dead, his suspension from the profession is no longer relevant.

With his death, the initial administrative decision against the teacher slid into irrelevance, Mr. Tekin said on his Twitter account, insisting that it does not mean restoring the honor of the slain teacher.

His lack of remorse or reference to how the teacher died in custody also sparked dismay.