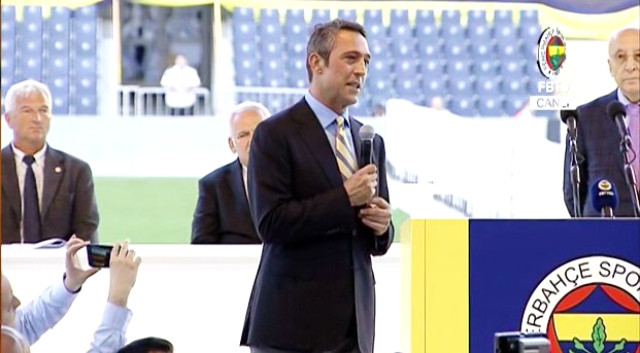 Ali Koc, a member of Turkey’s richest family business group, Koc Group, was elected to be the new chairman of Istanbul soccer powerhouse Fenerbahce in a historic contest against Aziz Yildirim whose 20 year-reign shaped the club’s modern history as well as Turkish football’s.

In a club congress held in Istanbul on Sunday, Koc ran on a promise for change. And he garnered 16,092 of the 20,736 votes in a landslide victory against Yildirim who was only able to get 4,644 votes.

The contest took place in a bitter rivalry, reflecting a generational change between two personalities and two worldviews. Yildirim who ran the club since 1998 made Fenerbahce richer, modernized its face. During his tenure, Fenerbahce became champion of the Turkish Football League six times.

He is one of the most controversial figures of Turkish football landscape and endured many storms that swept both his club and Turkey’s ever-evolving soccer world.

In 2011, he was remanded by Istanbul police over charges of match-fixing. He remained imprisoned one year pending trial. He was elected 10 times to the chairmanship of the club, defying myriad of odds and expectations for a downfall.

His discontents accused him of building a one-man rule in the club, corrupting the business of football, exerting pressure on referees and football federation. He was a polarizing and divisive figure at the club; having enjoyed a loyal support base but also a growing number of opponents.

US, Turkey Commit to Work on Implementing Roadmap in Syria’s Manbij