After 16 Years in Power, Erdogan Shows Signs of Fatigue

Late last year, a number of mayors from ruling Justice and Development Party (AKP) found themselves axed by President Recep Tayyip Erdogan in a massive intra-party reshuffle. To justify his move to place elected mayors of metropolitan cities on the choking bloc, Erdogan argued that ‘metal fatigue’ plagued the party spirit and some AKP-led municipalities. The replacement of mayors will again reinvigorate the party, he said in response to opposition from within the party.

That same Erdogan now shows unmistakable signs of fatigue these days during his presidential campaign. He seems to have lost his energetic appeal, his fervor and passion once he astutely displayed in campaign trails. TV ratings show that Erdogan’s election speeches no longer attract the audience. On Thursday night, the president was only able to garner 1.78 percent share of the day’s viewers, placing Erdogan’s interview at 27th place in television rating list. 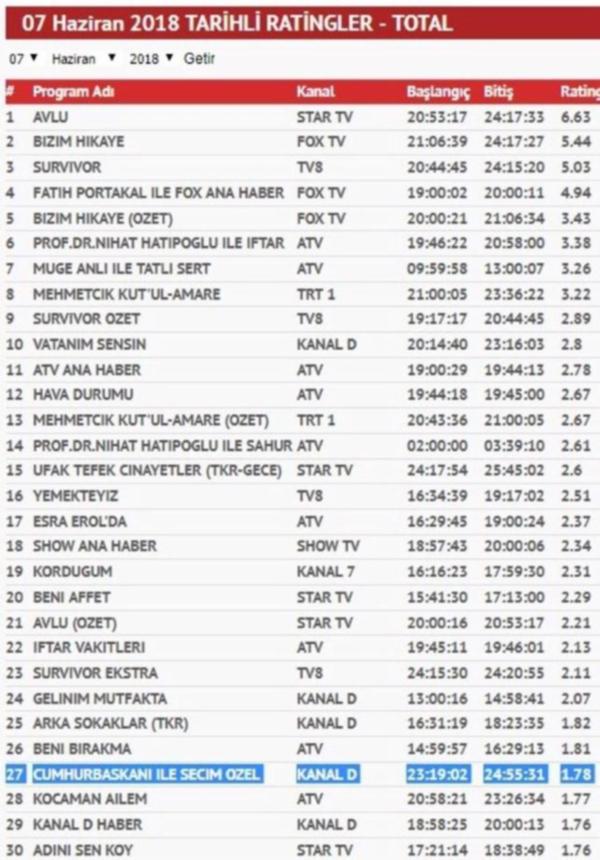 Even the repetition of TV show Arka Sokaklar (Back Streets) was ahead of the Erdogan interview aired on all TV channels of the Demiroren Media Group, whose name replaced the Dogan media after the purchase in April.

Apart from the poor figures, President Erdogan physically and mentally appears exhausted, often making mistakes during his speeches, losing the line of his talk and slip of tongue errors at unlucky moments.

In one of those moments, Erdogan suffered a stage blunder during a rally in the southeastern province of Diyarbakir last week.

In the middle of his address, the prompter stopped functioning and Erdogan appeared on stage clueless, in silence for nearly a minute. He then assailed his chief guard, expressing anger over the absence of the official responsible for operating the prompter.

The same Erdogan, during a televised interview, received guidance again from one of his assistants to continue his speech. The president’s blunders and veering of the script have become more frequent and disturbing. The man who mastered rare oratory skills and built a touch with the common man on the street now is unable to speak without a prompter or a guide to steer his lackluster speeches.

Erdogan’s Blunders and War on Facts

As if it is not already worrying, Erdogan showed no contrition over telling factually wrong anecdotes, even blatant lies about the economic record of his party and some political events in the past.

During a rally on April 28 in the western province of Izmir, Erdogan said it was his government which built the airport in the city. The airport was opened in 1987, well before the AKP. The AKP came to power in 2002.

On May 27, Erdogan said his party opened a university in the western province of Isparta, the hometown of former President Suleyman Demirel. The Suleyman Demerol University was indeed opened in 1992.

In the eastern province of Adiyaman, Erdogan again said during a campaign rally that his government constructed the city airport. The fact is that the airport was already opened in 1998, years before the AKP government.

His remarks spurred rebuke from his opponents and sparked nationwide debates. The full-scale adoption of the usage of refrigerators took place several decades before the AKP rule and is no longer seen as an indicator of economic well-being or a certain level of social status for people. It is so widespread and common that, even citing it seems absurd. It became a source of mockery in social media, with many people saying that there are refrigerators but empty, citing the soaring food prices.

President Erdogan blasted jailed Kurdish politician Selahattin Demirtas, presidential candidate of pro-Kurdish People’s Democracy Party (HDP). for events during Kobane siege in Syria. “Do you remember when our country went through after June 7 elections, don’t you? Did they kill our brothers in Diyarbakir, 53 Kurdish brothers in streets with the order of the man who is the head of HDP?” Erdogan asked. “This same man now emerged and became a presidential candidate,” he added. The events he talked took place in October 2014, not after June 2015 elections.

After the HDP called on its supporters to go out in streets to protest the Turkish government’s policy when Islamic State (ISIS) laid out a siege to Kurdish town of Kobane near the Turkish border in late 2014. Despite international calls, Turkey did not intervene to stop the ISIS onslaught.

During October 6 and 7, Turkey has been hit by street clashes and nationwide demonstrations. More than 50 people were killed in Diyarbakir and southeast Turkey in clashes between rival Kurdish groups.

In another blatant distortion and manipulation of historical facts, Erdogan added a new twist to a dialogue took place between a left-leaning politician and former Prime Minister Turgut Ozal in the early 1980s.

Erdogan said: “communists vowed to sell Istanbul Bridge and Ozal rebuffed them with saying no.” The correct version of the story is different. During a televised debate on state-run TRT channel in pre-election campaign period in 1983, People’s Party Chairman Necati Calp told Ozal: “You cannot sell the bridge.” Ozal who was known for his liberal views on economics replied with a smile: Yes, we can. Erdogan simply reversed what leaders said on that TV debate and distorted it.

But one story Erdogan told sparked laughter and showed that there is no limit he cannot push to expand. The president said he took education in over-crowded school classes along with 75 students during the single party CHP era. But it is technically and historically impossible. President Erdogan was born in 1954 and Turkey had already made a transition to a multi-party political system in 1946 and Democrat Party began to rule the country in 1950.

When he was born, the secular Republican People’s Party (CHP) had no longer been in power.

In one memorable incident, folk singer Ibrahim Tatlises recalled a memoir in the rally in Izmir in April. Appearing onstage along with the president, Tatlises thanked Erdogan for bringing natural gas to his apartment in Istanbul in 1992.

“My little son Ido was two months old. He was cold. I called Mayor Erdogan and told about this. He then immediately secured the connection of natural gas to our apartment,” he said.

Tatlises’s son was born in 1992 and Erdogan only became mayor in 1994. His remarks elicited a harsh reaction from opposition parties and Erdogan’s discontents over what they say intentional lying.

Nesrin Nas, a former senior official at now-defunct Motherland Party (Anavatan Partisi), said she was living in the same gated community along with Tatlises. The gas heat was brought to the apartment complex in 2000, she said on Twitter. “And that time Ido was 8-years-old little boy, not 2-month old.”

Until this campaign, Erdogan had never displayed such disregard for facts and historical accuracy before. His open contempt for the reality and facts has become so noticeable that his detractors and critics never miss a chance to record and display them in social media. The president appears to be affected by a palpable fatigue. After 16 years in power, it would be natural for a leader who had to weather countless storms such as nationwide Gezi protests, a corruption scandal and a botched coup attempt.

Whether he would survive June 24 elections appears to be a matter of controversy given a growing body of mistakes and blunders during the campaign trail. To add to his woes, polls suggest problems ahead. The opposition alliance for parliamentary elections is on the verge of sealing an upset victory, according to recent surveys. 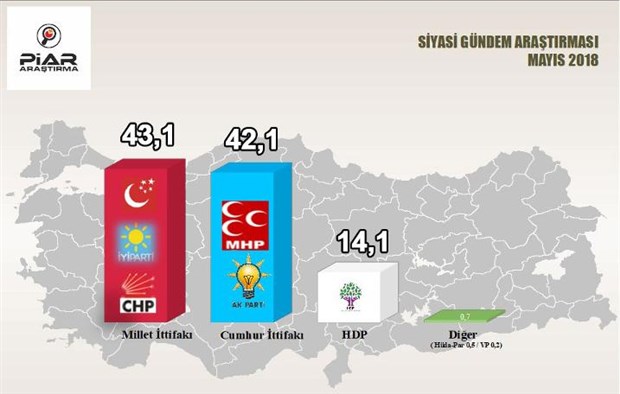 A poll conducted by Piar company, Erdogan’s ruling party and its nationalist ally seem to lose the parliamentary majority to “Nation Alliance” forged by four opposition parties. The opposition parties garner 43 percent of the votes while AKP-MHP alliance only captures 42 percent of the votes. Less than three weeks into the elections, the president may need to revisit his campaign again to avoid an accident in parliamentary elections.

Turkey, US to Jointly Patrol Kurdish-Held Manbij in Syria